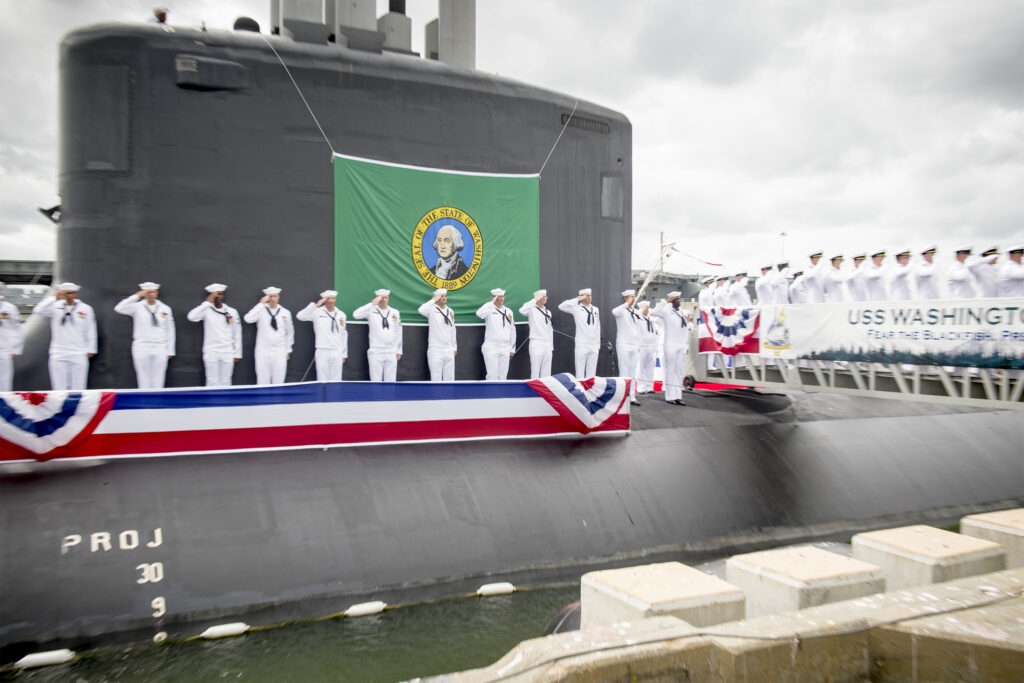 NORFOLK, Virginia (NNS) — The Navy with assistance from the submarine’s sponsor Elisabeth Mabus, daughter of the 75th Secretary of the Navy Ray Mabus, commissioned and brought to life the newest Virginia class submarine, USS Washington (SSN 787), during a ceremony on board Naval Station Norfolk, Oct. 7.

Washington, named in honor of the 42nd state, is the 14th Virginia-class, fast-attack submarine to join the Navy’s operational fleet. Elisabeth Mabus expressed how proud she was of the crew and their families.

“I know, though you are all eager to set out on the Washington, this like all naval service will requires you to be away from your families for long stretches, so thank you to the families” said Mabus. “In a very real sense you are plank owners of this ship as well.”

Mabus gave the order to “man our ship and bring her to life” before the crew of about 130 men ran across the brow, onto the vessel.

“We won’t know what challenges we will face as a nation in 10, 15 or 20 years, but we know because of the work being done now at Newport News and Electric Boat and by the Sailors who call this ship home, USS Washington will be prepared for whatever is to come,” said Mabus.

“As I have told the crew on many occasions, they are the most important component of the ship. They give the ship its personality and warfighting spirit. Without the crew, Washington would not be the warfighting platform she was built to be; however, combine the two, and, together, we are the Blackfish,” said Cavazos.

Today USS Washington is alive and stands ready for mission.

“Thank you for being here to celebrate this momentous occasion with us,” said Cavazos.

Washington is the fourth U.S. Navy ship, and first submarine, to be named honoring the State of Washington. The previous three ships were an armored cruiser, (ACR 11), which served from 1905 to 1916, the battleship (BB 47) a Colorado-class battleship launched in 1921 and sunk as a gunnery target in 1924 after her construction was halted, and the battleship (BB 56) credited with sinking more enemy tonnage than any other U.S. Navy battleship during World War II, serving from 1941 to 1947.

The submarine is 377 feet long, has a 34-foot beam, and will be able to dive to depths greater than 800 feet and operate at speeds in excess of 25 knots submerged. It will operate for over 30 years without ever refueling.