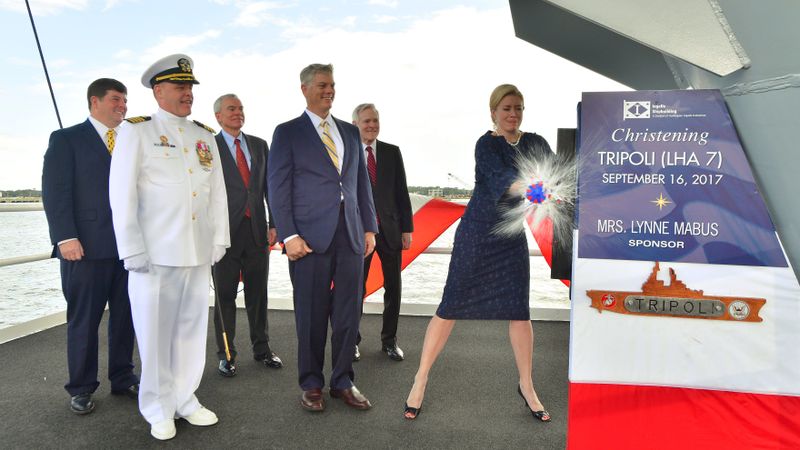 Lynne Mabus, wife of former Secretary of the Navy Ray Mabus, is the ship’s sponsor and officially christened Tripoli after successfully breaking a bottle of sparkling wine across its bow.

“I’d like to thank the shipbuilders, who, through what must be supernatural abilities, have built something that goes beyond anything nature could create,” Mabus said. “This ship was built by the hands of the women and men of Huntington Ingalls, but it looks as if it was built by the hands of the gods. She is made of 45,000 tons of steel and sweat, and she will carry on her back and in her belly aircraft such as the Harrier, Osprey, Lightning, King Stallion, Viper, Night Hawk. She will also be a place our sailors and Marines will call home.”

Thomas Dee, who is currently serving as Under Secretary of the Navy, gave the ceremony’s keynote address. “When USS Tripoli, the newest America-class amphibious assault ship, joins the fleet, we’ll be a stronger, more flexible and better Navy and Marine Corps team,” he said. “The ship will be a force-multiplier, and her crew will proudly serve our country for decades to come. I am grateful to the men and women of Ingalls Shipbuilding for their dedication and to the citizens of Pascagoula for their unwavering support as we continue to make our Navy stronger.”

Tripoli will be the third ship to bear the name that commemorates the capture of Derna in 1805 by a small force of U.S. Marines and approximately 370 soldiers from 11 other nations. The battle, memorialized in the Marines’ Hymn with the line “to the shores of Tripoli,” brought about a successful conclusion to the combined operations of the First Barbary War.

This entry was posted in Christenings and tagged christenings, uss tripoli. Bookmark the permalink.