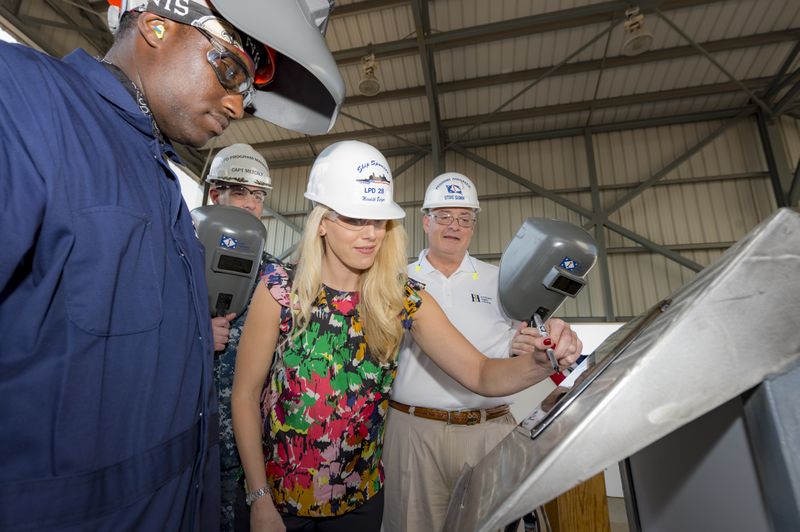 PASCAGOULA, Miss. (NNS) — The keel for the future USS Fort Lauderdale (LPD 28) was authenticated during a ceremony at Huntington Ingalls Industries (HII), Oct. 13.

Keel laying is the traditional start of ship construction. In the age of wooden ships, ‘keel laying’ referred to the laying down of the piece of timber serving as the backbone of the ship or keel. Although modern manufacturing techniques allow fabrication of portions of a ship to begin many months earlier, the joining together of modules is considered the formal beginning of a ship.

The keel was authenticated to be “truly and fairly laid” by the ship’s sponsor, Meredith Berger, former Deputy Chief of Staff to the Secretary of the Navy who previously served as a senior policy advisor within the Department of Defense, the Environmental Protection Agency and the State of Florida.

LPD-28 is named in honor of the Florida city and will be the first Navy vessel to bear the name and will be the Navy’s 12th San Antonio-class amphibious transport dock ship. The future USS Fort Lauderdale is planned for delivery in 2021. Eleven LPD-17 ships have been delivered, the most recent being USS Portland (LPD 27), which was delivered Sept. 18, 2017. HII is also procuring long lead time material and advance procurement in support of LPD-29.

As one of the Defense Department’s largest acquisition organizations, PEO Ships is responsible for executing the development and procurement of all destroyers, amphibious ships, special mission and support ships, and boats and craft.