The History of the Society of Sponsors

The Society of Sponsors of the United States Navy was founded in 1908 by Miss (Annie) Keith Frazier (Somerville), Sponsor of USS Tennessee and Miss Mary Campbell (Underwood), Sponsor of USS Birmingham with the support of the Secretary of the Navy and President Theodore Roosevelt. The fourteen original members met at the Willard Hotel in Washington DC for their first business meeting, and were guests that evening of the President for the Army-Navy Reception. For many years the Annual Meeting of the Society was held at the Willard Hotel; frequently, a White House Reception or Tea was part of the annual activities. In 1958, Mrs. Somerville penned a booklet, commemorating the 50th Anniversary of the Society; she died in 1978. In 2008 the Society celebrated its Centennial Year.

The Society has published five volumes of Ships of the United States Navy and Their Sponsors. The first one covers ships christened between 1797-1913; the latest one, 1958-1990, was published by the Naval Institute Press.

It all started back in 1907, when I saw in a newspaper account of the launching of the cruiser BIRMINGHAM, where it had been suggested there that the girls who had christened ships in the U.S. Navy should form a society. The idea intrigued me, and I sat down immediately and wrote Mary Campbell, Sponsor of the BIRMINGHAM, and asked if anything had been done about such a society, and if not, why didn’t we try to organize one. She replied that nothing had been done and she thought it would be fun to try-but how? Well, I didn’t know how either, so I took the matter up with father, who was then in the U.S. Senate from Tennessee. He suggested, as the first move, a visit to the Secretary of the Navy to find out from him if a list of Sponsors had been kept, and went with me to see Mr. Metcalf. No list had been kept, but the Secretary gave me a list of all the ships then in the Navy, with where they were built, suggesting that perhaps shipbuilders had such lists. I wrote them all, with little luck, for they had no complete lists either. Then (again at father’s suggestion) we wrote (for I sent part of the list to Mary Campbell) to the mayors of all towns for whom ships had been named, and I myself wrote to Senators representing states for whom ships had been named. I recall the next night after I sent out those letters, that while I was dressing for a dance, Senator Stephenson called to tell me his daughter had christened the WISCONSIN, and Senator Blackburn to tell me that the Sponsor of the KENTUCKY was Mrs. John South.

The excitement of a dance sank into insignificance beside the fact that I’d gotten two sponsors’ names in one night! Every new name was a gold nugget to the enthusiasm of youth!

When we had collected about twenty names, I contacted a newspaper friend down in Tennessee, Miss Zella Armstrong, she agreed, if I’d send her some pictures of Sponsors, to write a feature story about it and try to sell it to Sunday supplements. I did, and she did! The story came out in Sunday papers across the nation, and was our very first publicity. After that, the names rolled in.

About the same time, Admiral Schley, who had become interested, sent the story with my name and address, to the Army and Navy Register and that produced results, too. 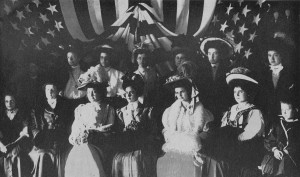 By December we had collected 97 names, and felt we had enough to call an organization meeting. The first idea was to have it at our house in Washington. We lived then at 1213 Connecticut Avenue, and as we didn’t hope for a large attendance, space would have been ample. But mother thought it would sound better to call it at a semi-public place, so she helped me get in touch with her friends, Mrs. Donald McLean and Mrs. (Vice President) Fairbanks (prominent D.A.R. of that era), and get permission to call the organization meeting at Memorial Continental Hall, then being built. That settled, the next question was when. I had an idea that we might lure some sponsors who had never attended a White House reception if we could assure them of that. So father took me to see “Teddy” Roosevelt, then President, and he was “delighted” with the idea and readily gave orders for invitations to the Army and Navy reception to be sent to any Sponsors whose names I sent in.
Next morning father accompanied me down to the Senate Stationery room, and we gave the order for 100 invitations-

You are cordially invited to be present and to participate in the organization of the Society of Naval Sponsors on the nineteenth of February, 1908, at twelve o’clock Continental Hall Washington, D.C.

Under the caption, “Ready to Launch Sponsor Society,” a Washington paper (1908) wrote: “Miss Keith Frazier, daughter of the Senator from Tennessee, is the busiest young society girl in Washington and she has developed remarkable executive ability, which does credit to her distinguished father. Upon her shoulders has fallen all the detail work of the organization of one of the most unique societies in this country, the Society of Naval Sponsors.”

I was busy but I didn’t deserve that, for I have always felt that it was due to father’s executive ability, and not to mine, that the Society of Sponsors was started at that time. Probably it would have come later, for in this America of ours an idea once planted generally does reach fruition, but not then. Mary and I were both very young (she still in school in Baltimore), and while we had enthusiasm, we certainly lacked any knowledge of organization.

A day or so later the old horse-drawn wagon, which delivered things from the Capitol in those days, drew up before our door, and those beautiful engraved invitations arrived! I started addressing them immediately! As I look over that list today, I am amazed that I had as many replies as I did, for so many of the addresses were woefully inadequate. For instance there was – “Mrs. Russel C. Langdon, Present address, Jamestown Exposition”! Surprisingly it reached her, and Mrs. Langdon should have been a charter member, but it was not till some years later that she became so interested, and did so much for twenty-five years to make our society into the recognized national patriotic organization it has become.

I had 45 replies from interested Sponsors, but when that momentous, snowy morning in February arrived, only 14 were present. I had learned the night before that the furnace in Constitution Hall was not working properly, so I rushed down early and stood shivering in the door, as I awaited the Sponsors’ arrival. When they gathered, we adjourned to the warmth of the Willard for our first meeting. But we did meet there, and were the first organization to do so – even before the D.A.R. themselves!

And that’s the story of how our Society was started.
Keith Frazier Somerville