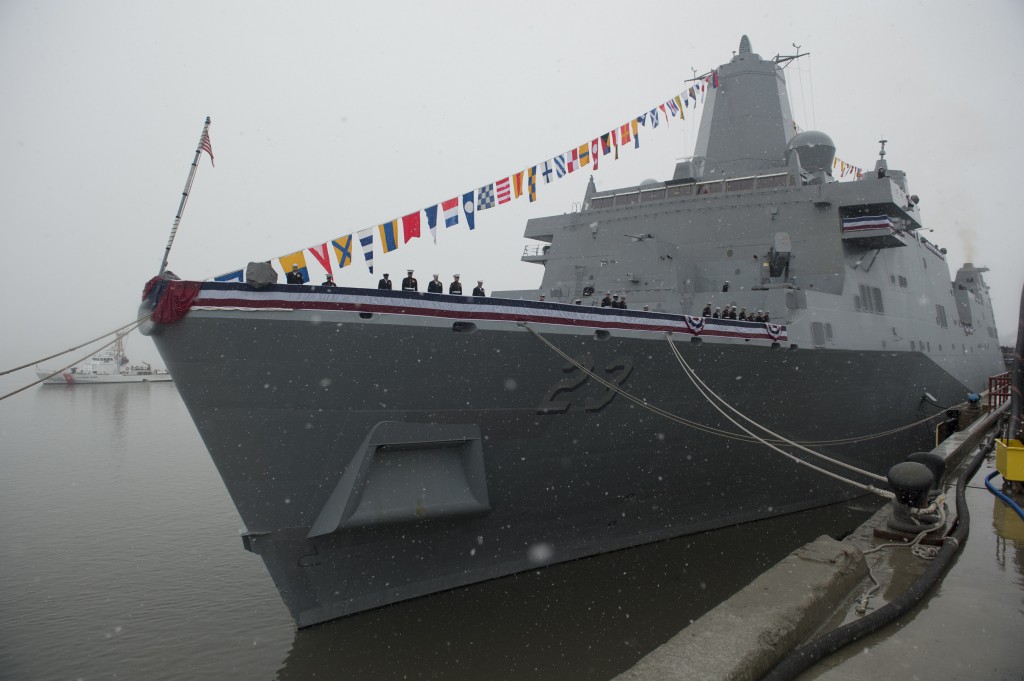 Sailors and Marines man the rails after bringing the ship to life during the commissioning of the San Antonio-class amphibious transport dock ship USS Anchorage (LPD 23) at the Port of Anchorage. More than 4,000 people gathered to witness the ship’s commissioning in its namesake city of Anchorage, Alaska. U.S. Navy photo 130504-N-DR144-900.

The commissioning culminated more than seven years of construction and development for the seventh San Antonio-class LPD that was built at the Huntington Ingalls Industries Shipbuilding site in Avondale, La., and delivered to the U.S. Navy last September.

“To the commander and crew of Anchorage, it’s great to see you again. Last time it was in Avondale, La., near New Orleans when I toured the ship and it was hot and muggy and 90 degrees,” said Haney. “I am deeply honored to commission a United States warship named after such a wonderful city, representing great people that have a rich and vibrant culture.”

“The ship and her crew are a testament to the pioneering spirit of the city it represents,” said Stewart. “The relationship the crew forged with the shipbuilders helped create a vessel worthy of the name, and she will serve the nation for the next four decades on the foundations set by that relationship.”

Anchorage is the second ship to be named for the city. The first USS Anchorage (LSD 36) was commissioned in 1969 and served in Vietnam, Operation Desert Storm, and Operation Iraqi Freedom before being decommissioned in 2003.

“I never thought I would have found myself bringing to life a ship with this name,” said Senior Chief Culinary Specialist Jacinto Ganac, a member of the decommissioning crew of LSD 36 and current member of LPD 23’s plankowner crew. “It’s an honor to be a member of both crews because I feel as though I am passing along a great tradition and knowledge to a newer generation that will serve us long after I leave the service.”

The ceremony ended a four-day celebration in which the crew was able to interact with the city and its welcoming hosts. Public tours allowed guests to get a first-hand view of the ship as well as the various aircraft and marine amphibious vessels on display which included an MV-22 Osprey, a CH-46 Sea Knight helicopter, and a landing craft air cushion (LCAC).

Seaman Cruz Boseman, one of the ship’s crew to call the city of Anchorage home, said he enjoyed being able to show off the ship to his fellow Anchorage citizens.

“It was great timing that I was able to be selected to be a part of this crew,” said Boseman, who enlisted in the Navy in May 2012. “When I was in boot camp, [pre-commissioning commanding officer Capt. Brian] Quin happened to be visiting in the building where I was assigned during my training and I was excited to learn of a new ship being named after my hometown. We have a hardworking spirit in Anchorage and what’s great is that is the same mentality I see every day in my shipmates. I know we’ll make this city proud.”

Anchorage‘s crew will transit back to San Diego to continue preparing for Final Contract Trials (FCT) in July. FCT is the final assessment from the Navy Board of Inspection and Survey (INSURV) in which the crew will be responsible for demonstrating the effectiveness of all installed equipment and systems.

“The ceremony is a nice pause for a majority of the crew who has worked tirelessly to bring this ship to life over the past two years,” said Stewart. “But we press on and are ready to execute the gold standard we established. It’s the nature of our job and I’m sure the great people of Anchorage and the nation would expect nothing less.”

USS Anchorage, a San Antonio-class amphibious transport dock, embarks, transports, and lands elements of a landing force for a variety of expeditionary warfare missions as well humanitarian efforts when the need arises.