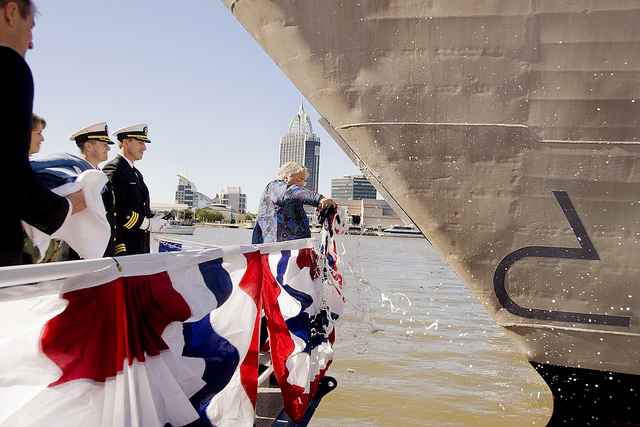 MOBILE, Ala. – The fourth littoral combat ship was christened Coronado during a ceremony at Austal USA Shipyard in Mobile, Ala., Jan. 14.

Assistant Secretary of the Navy for Research, Development & Acquisition, Sean Stackley, delivered the principal address at the ceremony, and Susan Ring Keith served as the ship’s sponsor.

“Today’s ceremony is a testament to the hard work and dedication of Austal’s talented shipbuilders,” said Austal USA President and Chief Operating Officer, Joe Rella. “We are proud of our accomplishments and honored to be building these magnificent warships that are already shaping the future of the modern day Navy.”

The ship is capable of speeds in excess of 40 knots and can operate in water less than 20 feet deep. Coronado will address a critical capabilities gap in the littorals and conduct the Navy’s mission to enhance maritime security by deterring hostility, maintaining a forward presence, projecting power and maintaining sea control.

The ship’s name recognizes the city of Coronado, Calif., and honors the city’s deep ties to the U.S. Navy. Coronado has been home to Naval Air Station North Island and Naval Amphibious Base, since 1917. Two previous ships have been named after this city: USS Coronado (PF-38), a Tacoma-class patrol frigate, earned four battle stars for supporting landings in New Guinea and Leyte during World War II, and USS Coronado (LPD/AGF-11), an Austin-class amphibious transport dock later re-designated as an auxiliary command ship, served as flagship for U.S. 3rd Fleet and was decommissioned in 2006.

Upon her birth in Coronado, ship sponsor Susan Ring Keith joined a long family history associated with the Navy and Coronado. In addition to her father, both of her grandfathers and both of her uncles were career naval officers. Her two brothers followed their father into the naval service, with one brother retiring as a rear admiral.

Her godfather (and later step-father) was Rear Adm. Put Storrs, one of the Three Seahawks, the predecessors to the Blue Angels. Susan was the quintessential Navy Junior, and she as well entered the Navy as a Navy wife and Navy mother.

In 1966, her mother, Eleanor Ring, christened the previous USS Coronado (LPD/AGF-11) and Susan served as maid of honor. In 2009, Susan Ring Keith was invited by the secretary of the Navy to serve as sponsor of Coronado (LCS 4). Susan’s daughter, Isabella (Belle) Keith Drouin, will follow in Susan’s footsteps by serving as the ship’s matron of honor.