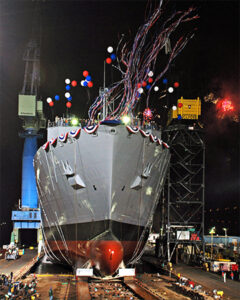 Military Sealift Command dry cargo/ammunition ship USNS Cesar Chavez slides into the water for the first time during the ship’s launch and christening ceremony May 5 at the General Dynamics NASSCO shipyard in San Diego. USNS Cesar Chavez is the 14th and final ship in the U.S. Navy’s T-AKE program. Photo by Sarah E. Burford. US Navy Photo

With the crack of a champagne bottle and the traditional words, “I christen you,” Military Sealift Command ship USNS Cesar Chavez was christened May 5 during an evening ceremony at the General Dynamics NASSCO shipyard in San Diego.

Chavez, a well-known Mexican-American civil rights activist, used non-violent tactics that made the farm workers’ struggle a moral cause with nationwide support.

“It is fitting that this ship is named for Cesar Chavez, for among the core values embraced by him were innovation, determination, sacrifice and service to others–core values shared by Military Sealift Command–core values that are the basis of service for this great ship and her crew, now and into the future,” said Navy Rear Adm. Mark H. Buzby, commander, MSC, to an audience of more than 7,000 people who attended the event.

Ceremony attendees included the ship’s sponsor Helen Fabela Chavez, widow of the ship’s namesake, and nearly 500 other members of the Chavez family; the ceremony’s keynote speaker, the Honorable Juan M. Garcia III, assistant secretary of the Navy (manpower and reserve affairs); the Honorable Jerry Sanders, mayor of San Diego; distinguished guests from the U.S. military and maritime industry; and NASSCO employees who built the ship.

“USNS Cesar Chavez exemplifies the latest innovations in marine technology with its integrated electric power propulsion and ship systems,” said Buzby. “This ship will go to sea better prepared than the ships that preceded her because the team that built her learned new lessons with every ship of the class and incorporated those lessons learned, along with energy-saving technologies into the next hull. USNS Cesar Chavez is the culmination of that extraordinary process–she is The Ultimate T-AKE!”

Cesar Chavez is the 14th and final dry cargo/ammunition ship, and is slated for use by MSC’s Combat Logistics Force, or CLF. CLF ships deliver ammunition, food, fuel and other supplies to U.S. and allied ships at sea, enabling the Navy to maintain a worldwide forward presence.

“Being the first master of this ship is a real honor for me,” said Capt. Keith Walzak, Cesar Chavez’s civil service master. “I’m excited to lead this great crew and to follow in the footsteps of the example set by a great leader, Cesar Chavez.”

USNS Cesar Chavez is scheduled for delivery to MSC in November.