During her remarks, Stiller mentioned today marked the 38th christening that she has attended, but emphasized how special the day was for her.

“All of the christenings have been special, but this will be the most special one that I will be a part of,” said Stiller. “The ship may be made of steel and fiber and the finest technology, but the crew is what is most important.”

Stiller christened the Virginia-class submarine with sparkling wine. Similar practices became a popular tradition as the 19th century ended, according to the Navy’s History and Heritage Command. The first such occasion was when a granddaughter of Secretary of the Navy Benjamin P. Tracy used a bottle of champagne to christen Maine, the Navy’s first steel battleship, at the New York Navy Yard, Nov. 18, 1890.

Keeping with tradition, 121 years later, the Secretary of the Navy Ray Mabus, a native of Mississippi, attended and spoke at the christening. He discussed the day’s significance for the Nation, the great state of Mississippi, the Navy, and the Virginia-class submarine program.

“For the men and women who built Mississippi and those who crew her, it is your work that proves an effective partnership between Navy and Industry can keep costs under control,” said Mabus.

Mabus reflected on the hard work and teamwork of the shipbuilders and crew to create a world-class submarine.

“It is the work of shipbuilders and the crew that guarantees our submarine force remains the best in the world. It is your work that assures that the Navy and Marine Corps stay the most formidable expeditionary fighting force the world has ever known,” said Mabus. “And it is your work that guarantees freedom around the globe. When you look at this ship, you know American exceptionalism will not only survive, it will prevail.”

During Richardson’s remarks he reflected on the motto for the state and the warship, “By Valor and Arms – Virtute et Armis.”

“What a terrific motto for a state and for a warship. It’s terrific to be here in Groton to celebrate the christening of PCU Mississippi,” said Richardson. “We just commissioned USS California in late October and she’s already at sea. We’re christening Mississippi today, and we have PCUs Minnesota, North Dakota and John Warner in construction right behind her.”

Richardson highlighted the success of the Virginia-class submarines already commissioned and in the fleet.

“USS Virginia, USS Hawaii, and USS Texas are in the fleet and have already made extended deployments. USS North Carolina began her maiden deployment just a few days ago. These super-capable warships, whether at sea on station or in construction, form a powerful message that communicates the dedication of the shipbuilders, the Sailors, and the entire United States,” said Richardson.

During Barbour’s remarks he welcomed PCU Mississippi on behalf of his great state, which will mark its 194th anniversary of entering the Union Dec. 10.

“On behalf of the three million citizens, I’m honored to claim her as one of our own,” said Barbour. “The Mississippi will be an incredible platform to defend our shores and extend our powers.”

Breckenridge assumed command in August 2011 and reflected on major milestones achieved this year to include the commissioning of USS California (SSN 781), and now the christening of PCU Mississippi.

“Maintaining the significant advantage our Nation enjoys in the undersea domain is a vital security imperative. Bad things don’t happen in the world because of the watchful covert presence and potent influence of our undersea forces,” said Breckenridge. “The christening of Mississippi is a tangible reminder of our commitment to safeguarding this advantage by investing in the best submarines built by the world’s greatest shipbuilding industrial base.”

Last month, Stiller was invited by Electric Boat to turn the controls to let the water flow to float the submarine for the first time. Since the keel laying in 2010 when her initials where welded to inside the hull, Stiller has routinely visited the submarine and her crew. Her support exemplifies the submarine’s motto.

“Every opportunity I have to spend time with the fine crew of the Mississippi on the deckplates of our boat is a true honor,” said Stiller. “It is such a privilege to interact with the dedicated and highly motivated Sailors, officers, and shipbuilders bringing Mississippi to life.”

Capt. John McGrath, commanding officer of PCU Mississippi discussed the crew’s participation and excitement leading up to this pivotal moment in the life of the submarine.

“When I reported to PCU Mississippi in December 2009, exactly two years ago, I stood ready to bring the crew and our Virginia-class submarine to life,” said McGrath. “Today is a pivotal point in the submarine’s history and I’m deeply honored to serve my Nation and my Navy in this capacity.”

McGrath, a native of Neptune, N.J., leads a crew of about 142 officers and enlisted personnel. He graduated from the U.S. Naval Academy in 1990, earning a Bachelor of Science degree in Electrical Engineering.

Virginia-class submarines are built under a unique teaming arrangement between General Dynamics Electric Boat and Huntington Ingalls Industries – Newport News. Construction on the submarine began in February 2007 and will be commissioned in June 2012.

Once commissioned in 2012, Mississippi, like all Virginia-class submarines is designed to dominate both the littorals and deep oceans. It will serve as a valuable asset in supporting the core capabilities of Maritime Strategy, sea control, power projection, forward presence, maritime security and deterrence. 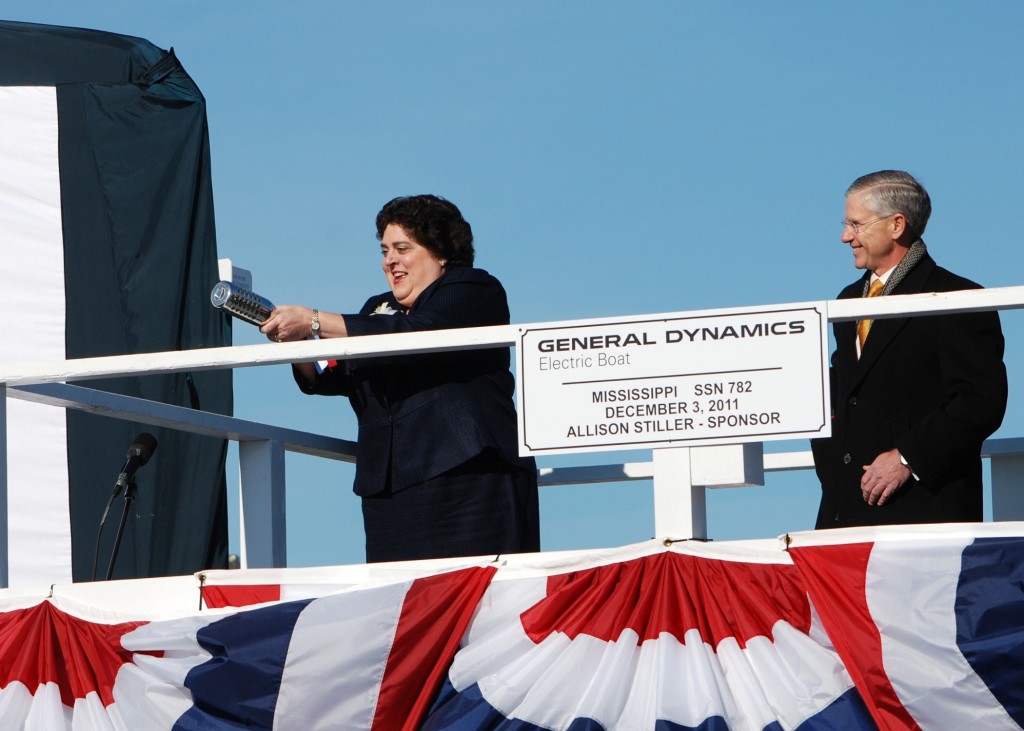