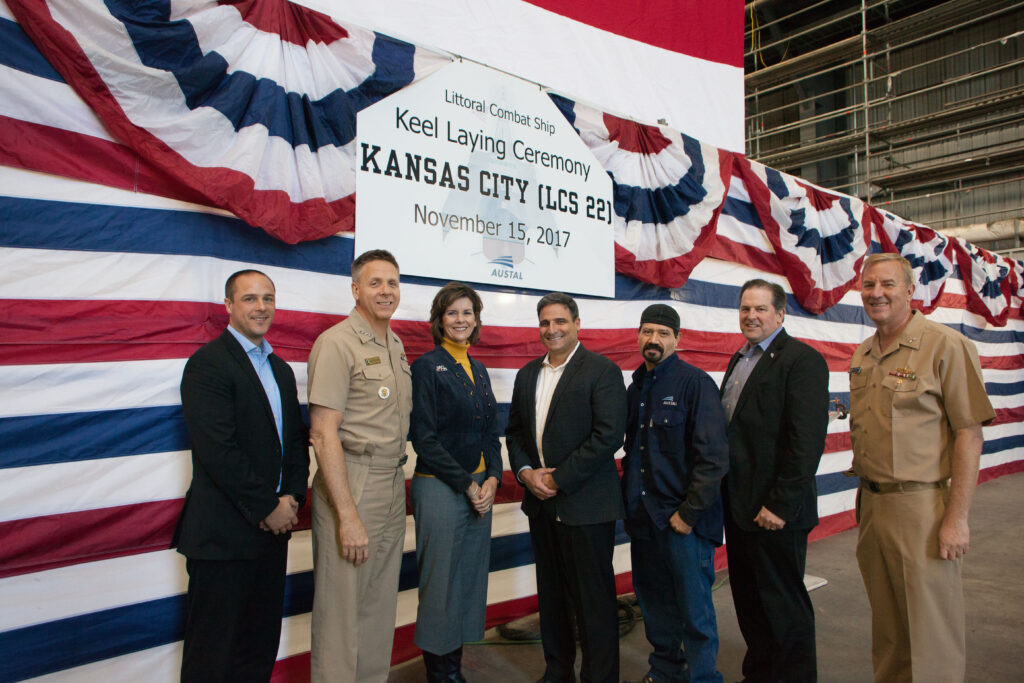 Ship’s sponsor Tracy Davidson, wife of Adm. Philip Davidson, Commander Fleet Forces Command, authenticated the keel for the 11th Independence variant of the littoral combat ship class during the ceremony. While keel laying traditionally represents the formal start of a ship’s construction, advanced modular shipbuilding allows fabrication of the ship to begin months in advance. Today, keel laying continues to symbolically recognize the joining of the ship’s components and the ceremonial beginning of the ship.

“In the coming months, the hardworking men and women of Austal USA will pull one million feet of cable, install 550,000 square feet of insulation, weld 75,000 feet of pipe and shape 850 metric tons of aluminum into an engineering marvel,” said Rear Adm. John Neagley, program executive officer for Littoral Combat Ships.

“Through the hard work and dedication of the men and women of Austal, this keel will be built up to a highly-capable Navy ship,” he said. “Thanks to all of you for the effort that will be put into completing this great ship that will exemplify its namesake city.”

Kansas City will be approximately 418 feet in length, with a width of nearly 104 feet.

LCS is a modular, reconfigurable ship designed to host interchangeable mission packages onto the seaframe in support of surface warfare, mine countermeasures and anti-submarine warfare. The Navy’s LCS class consists of the Freedom variant and the Independence variant, designed and built by two industry teams. The Independence variant team is led by Austal USA and the Freedom variant team is led by Lockheed Martin. Both variants are purchased under a block-buy acquisition strategy. There are currently 13 LCSs under construction.