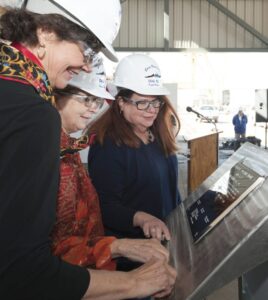 The ship’s keel was authenticated by the ship’s sponsors, Louisa Dixon, Virginia Munford and Rolanda Pickett Wilson. The authenticators etched their initials into the keel plate to symbolically recognize the joining of modular components and the ceremonial beginning of the ship.

“The keel laying is the first major event in a shipbuilding program and the keel is known as the backbone of the ship,” said Capt. Casey Moton, DDG-51 class program manager, Program Executive Office (PEO) Ships. “With the keel in place, the ship will begin to take shape and I look forward to seeing that happen over the next several months.”

The ship’s namesake, Lenah H. Sutcliffe Higbee, served as the second Superintendent of the Navy Nurse Corps in 1911 and received the Navy Cross for distinguished service in the line of her profession and devotion to duty. When she entered naval service in 1908, she was one of the first 20 women to join the newly established Navy Nurse Corps and contributed her nursing skills to the Navy during the First World War.

DDG-123 will be configured as a Flight IIA destroyer, which enables power projection, forward presence and escort operations at sea in support of low intensity conflict/coastal and littoral offshore warfare as well as open ocean conflict. The ship will be equipped with the Navy’s Aegis Combat System, the world’s foremost integrated naval weapon. The ship will also incorporate Cooperative Engagement Capability that, when combined with the Aegis Combat System, will permit groups of ships and aircraft to link their radars to provide a composite picture of the battle space, effectively increasing the theater space. The capability is designed to provide the Navy with a 21st century fighting edge.

As one of the Defense Department’s largest acquisition organizations, PEO Ships is responsible for executing the development and procurement of all destroyers, amphibious ships, special mission and support ships and special warfare craft.