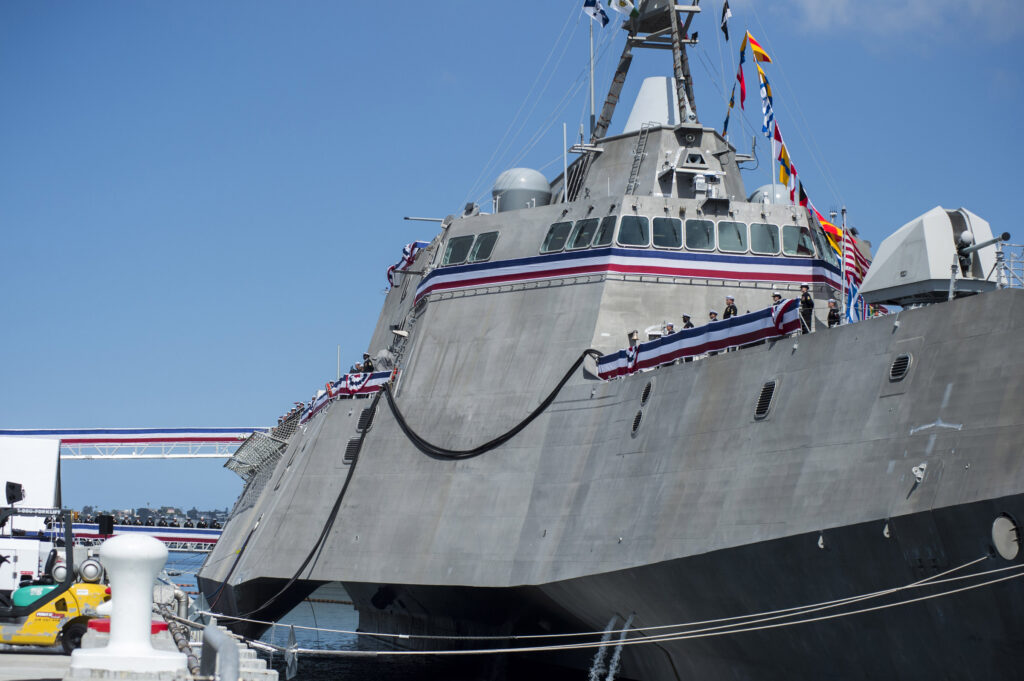 Coronado is the fourth littoral combat ship, the second of the Independence variant, commissioned into service and will be be outfitted with reconfigurable mission packages and focus on a variety of mission areas including mine countermeasures, surface warfare and anti-submarine warfare.

“On behalf of the Secretary of the Navy, it’s my pleasure to welcome the return of the name USS Coronado to the fleet,” said Vice Chief of Naval Operations Adm. Mark Ferguson, guest speaker for the ceremony. “There is no finer city for this celebration, and no more Navy pride than there is in Coronado.”

Ferguson talked about the nation’s expectations of today’s Navy and the role littoral combats ships like Coronado will play in the overall defense strategy and the Navy’s ability to operate forward.

“The Navy’s enduring forward presence ensures the security of the seas,” said Ferguson. “With her speed, shallow draft and mission packages, Coronado is perfectly suited for service around the globe.”

Susan Ring Keith, the daughter and stepdaughter of Navy admirals and a long-time leader in the San Diego community, was named as the ship’s sponsor and christened the ship Jan. 14, 2012 during a ceremony in Mobile, Ala.

“I want the crew to know that they will carry the hearts and thanks of all the residents of Coronado. We are so proud of what you do for us and so proud that you carry our name,” said Keith. “Now, I want you to man this ship and bring her to life.”

The 2,790-ton Coronado was built by Austal USA Shipbuilding in Mobile, Ala., at a cost of $400 million and is 417 feet in length, has a waterline beam of 100 feet, and a navigational draft of 15 feet. Coronado uses two gas turbine and two diesel engines to power four steerable water jets and can reach speeds in excess of 40 knots.

Hundreds of residents of Coronado, Calif., along with many city leaders including the mayor, attended the ceremony.

“I am happy to tell you that Coronado has been a proud Navy town for well over 100 years,” said Mayor Casey Tanaka, who presented both Johnston and Kochendorfer a key to the city. “Please place this key somewhere all your Sailors can see it so that they know whenever they drive over the bridge or up the strand, that when they see that number of 26,600 people who live here in Coronado, they know they are one of us now and forever.”

Named for the city of Coronado, Calif., LCS 4 is the third Navy ship to bear the name of the “Crown City.” The first USS Coronado (PF 38) was a patrol frigate and served as a convoy escort during World War II.

LCS vessels were designed to be high-speed, shallow draft multimission ships capable of operating independently or with an associated strike group. They are designed to defeat growing littoral threats and provide access and dominance in coastal waters.

A fast, maneuverable, and networked surface combatant, LCS provides the required warfighting capabilities and operational flexibility to execute focused missions such as surface warfare, mine warfare and anti-submarine warfare.

Providing warships ready for combat, developing Sailors, and training crews to fight and win are the subjects of Vice Adm. Thomas H. Copeman III, commander of Naval Surface Force, U.S. Pacific Fleet’s “Vision for the 2026 Surface Fleet.” This vision consolidates a set of objectives and policies to maximize surface force readiness by concentrating on warfighting ability, sustainable excellence and wholeness over time.