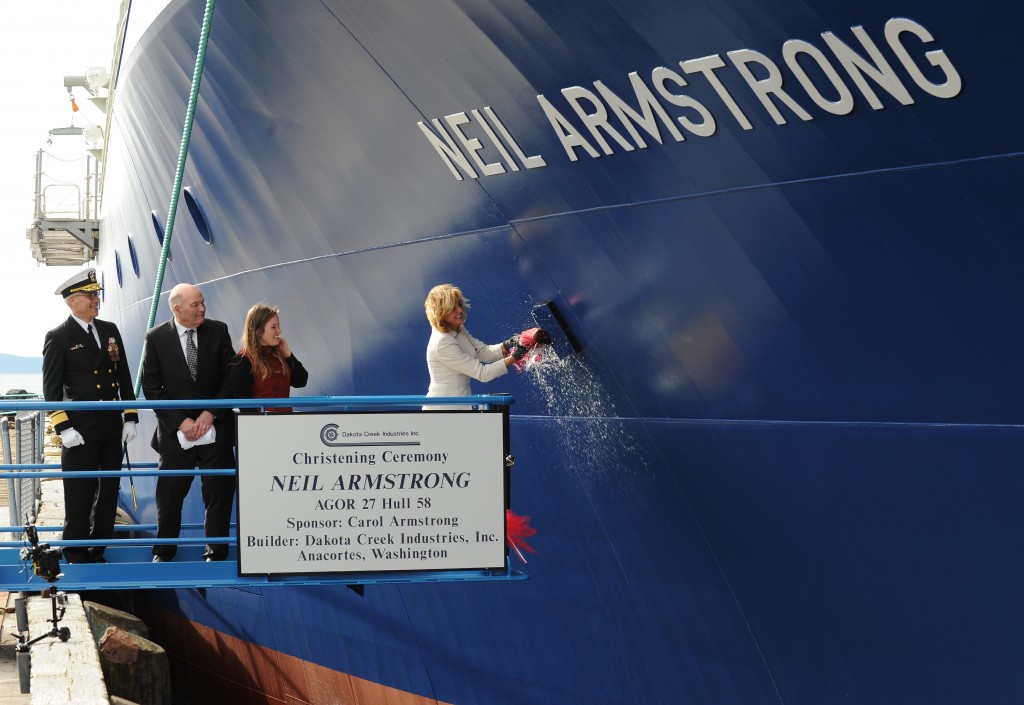 The lead Auxiliary General Oceanographic Research (AGOR) ship in its class, the research vessel (R/V) Neil Armstrong (AGOR 27) began construction in 2012 and will be delivered to Woods Hole Oceanographic Institution in January 2015 to continue studies in the Atlantic, western Pacific and Indian ocean regions.

“I can’t think of a better name to go on the side of a ship designed for exploration and discovery,” Klunder said. “R/V Neil Armstrong will play a pivotal role in teaching the Navy about the ocean so we can more effectively plan our operations around the world.”

The Navy, through the Office of Naval Research (ONR), has been a leader in building and providing large ships for the nation’s academic research fleet since World War II. The newest addition to the fleet, R/V Neil Armstrong will replace R/V Knorr (AGOR 15), which will be retired at the end of the year after nearly half a century of service.

R/V Knorr was launched during the same decade as President Kennedy’s vow to put a man on the moon and the famed Apollo 11 mission that fulfilled that vision. It is best known for carrying researchers on the 1985 expedition that resulted in discovery of the Titanic. In all, R/V Knorr has traveled more than a million miles-about the same distance as two trips to the moon and back.

“Now the R/V Neil Armstrong will provide a continuum of exploration for the next 50 years,” said Carol Armstrong, the astronaut’s widow and sponsor of the ship.

The new ship is 238 feet long and equipped with the latest technologies, including a high-efficiency diesel engine, emission control for stack gasses, information technology tools for monitoring shipboard systems and communicating with the world, and hull coatings that should result in fewer maintenance issues. It will operate with a crew of 20 with accommodations for 24 scientists who will use the ship and its assets to collect samples and data from both coastal and deep ocean areas.

In addition to officials from ONR, the christening at the Dakota Creek Industries, Inc. shipyard in Anacortes, Wash., was attended by the oceanographer of the Navy and representatives from the secretary of the Navy’s office. Kali Armstrong, the late astronaut’s granddaughter, was maid of honor.