Fort Worth Commissioned in Galveston 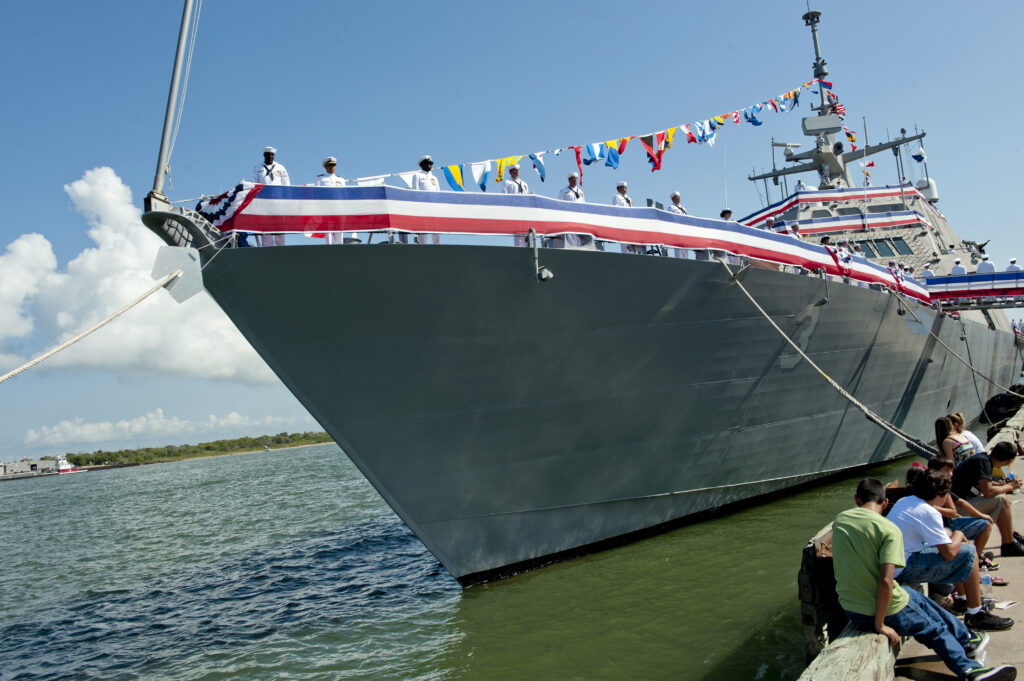 “To the crew, this day marks the beginning. You have already set the ships’ personality and character, and we anxiously await your arrival into the fleet for there is much to be done,” said Ferguson. “Our expectations for you and the ship are high. The ship arrives at a time when nearly half of our ships in the U.S. Navy are underway on any given day and we are faced with increasing challenges around the globe. We will be a stronger Navy as Fort Worth takes her place among the ships of the line.”

“Today’s celebration marks the official entry of the USS Fort Worth into the fleet and into naval history. Today, she becomes official sovereign U.S. territory and carries this unique status wherever her compass steers,” said Blankenship. “It is a tremendous honor to command this warship and to lead these Sailors who stand before you. Ship command isn’t about the captain, but rather the humble privilege to lead a group of outstanding men and women who selflessly give their service to our great country.”

The ship’s sponsor, U.S. Rep. Kay Granger, gave the order to the crew of Fort Worth to, “man our ship and bring her to life.”

“For a city that was founded by the military, having a ship that bears he our name is a special honor. I have the pleasure of standing before you today as a member of the Fort Worth community and the privilege to stand here as the sponsor of USS Fort Worth,” said Granger. “As we hand this powerful weapon to the U.S. Navy, we are welcoming these Sailors into the Fort Worth family. These brave crews will guarantee the USS Fort Worth will overcome challenges, and in doing so, will guarantee our freedom we so often take for granted.”

For the crew, the commissioning was a culmination of years of hard work. The Sailors who brought the ship to life today said they understand that the work they do is demanding, that each Sailor must maintain high levels of proficiency in multiple fields, and optimize ship operability with multiple crews.

“The Sailors you see before you manning the rails are truly the best and brightest America has to offer today. As the commissioning crews, these Sailors are the ones that set the culture, the standard, the reputation, and the personality of a ship,” said Cupps. “It took grit and tenacity to ensure Fort Worth‘s survivability when it was just on an Army outpost on the Western frontier, and it will take grit and tenacity for these great Sailors to make Fort Worth successful throughout her life as a naval warship.”

LCS is a fast, agile, mission-focused ship that demonstrates the latest in naval warfighting technology. The ship is specifically designed to defeat “anti-access” threats in shallow, coastal water regions, including fast surface craft, quiet diesel submarines and mines. To meet the combatant commander’s increased demand for mission-tailored forces packages, LCS features an interchangeable modular design that allows the ship to be reconfigured to meet mission requirements.

Fort Worth was christened by Granger in a ceremony at Marinette Marine Corp. shipyard in Marinette, Wis., on December 4, 2011. The ship completed builder’s sea trials on Lake Michigan, October 22, 2011, and was delivered to the Navy, June 6.

Fort Worth is 390 feet in length, with a steel mono hull, aluminum structure and is the third littoral combat ship in the fleet. It has a displacement of approximately 3,000 metric tons fully loaded, is capable of speeds in excess of 40 knots, and can operate in water less than 20 feet deep. Propelled by four water jets in addition to two diesel and two gas turbine engines, the ship boasts a range of over 3,500 nautical miles.

Fort Worth will be manned by one of two rotational crews, blue and gold, similar in concept to the rotational crews assigned to Trident submarines. These core crews will be augmented by mission package crews, as well as an aviation detachment.

This entry was posted in Commissionings and tagged christening, commissioning, Fort Worth, LCS, navy, society, SOSUSN, sponsors, US, USS. Bookmark the permalink.