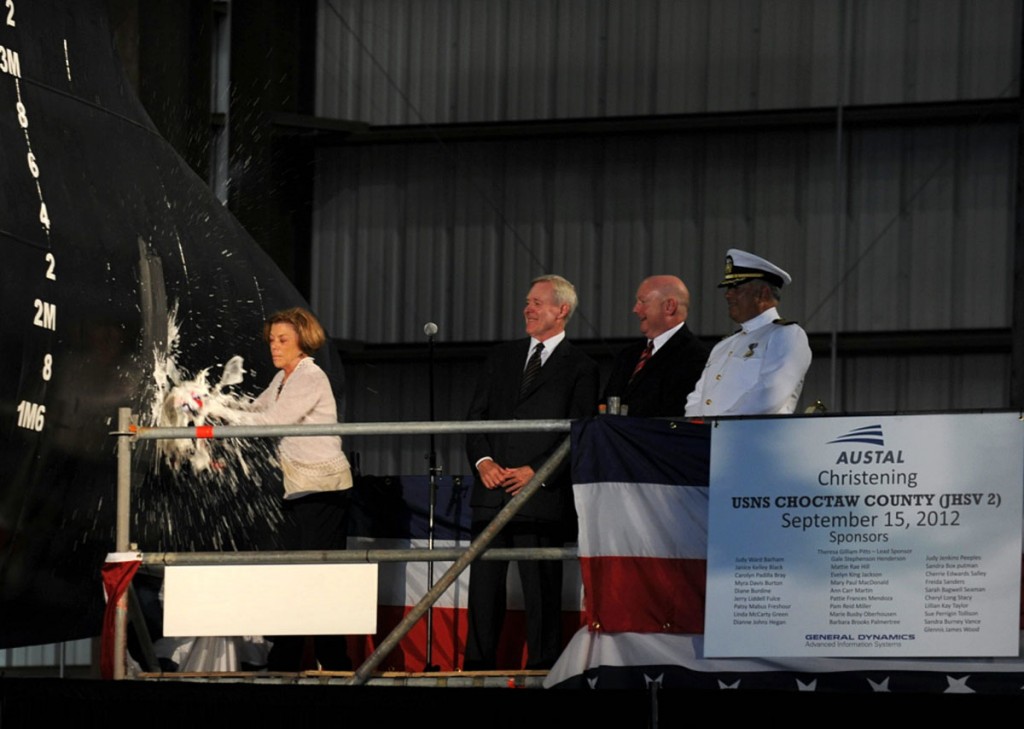 MOBILE, Ala. (NNS) — USNS Choctaw County (JHSV 2), the second of the Navy’s new joint high-speed vessels (JHSV) designed for rapid intra-theater transport of troops and military equipment, was christened, Sept. 15, during a ceremony at Austal USA in Mobile, Ala.

Military Sealift Command (MSC) will own and operate Choctaw County and the other JHSVs, that are under contract to be built for the Navy. Choctaw County will have a crew of 21 civil service mariners working for MSC who will operate, navigate and maintain the ship.

“The ship’s performance will be matched by the unique qualities of her crew – 21 civil service mariners committed to freedom, democracy and compassion,” said Rear Adm. Brian LaRoche, deputy commander, Military Sealift Command, during his address to an audience of more than 700 people including leaders from the military services, Congress and the maritime industry. “The impressive ship awaiting the crack of the champagne bottle will help safeguard those ideals. Choctaw County will carry the Military Sealift Command funnel stripes and the strength of the U.S. military anywhere America needs it.”

Secretary of the Navy Ray Mabus was the ceremony’s principal speaker. The ship is named for three counties in America, located in Mississippi, Alabama and Oklahoma, which share the name Choctaw County.

Twenty-nine women from the 1966 graduating class of Ackerman High School in Ackerman, Miss., served as the ship’s sponsors. Lead sponsor, Theresa Gilliam Pitts, a retired teacher, broke the traditional bottle of champagne across the bow to formally christen the ship while she and the other sponsors present said in unison, “For the United States of America, we christen thee USNS Choctaw County. May God bless this ship and all who sail in her.”

The 338-foot-long aluminum catamarans are designed to be fast, flexible and maneuverable, even in shallow waters, making them ideal for transporting troops and equipment quickly within a theater of operations. The 20,000-square-foot mission bay area aboard JHSVs can be reconfigured to quickly adapt to whatever mission the ship is tasked with, such as carrying containerized portable hospitals to support disaster relief or transporting tanks and troops.

“This ship class fits perfectly with the new concept of forward-basing,” said civilian Capt. Jose Delfaus, Choctaw County‘s civil service master who has been sailing for MSC for 31 years.

The goal of forward-basing is to cut back on the number of overseas bases by equipping more forward-deployed ships with troops and gear.

“JHSVs can join up with these ships and help them essentially by being their delivery truck, delivering anything they need from troops and gear, to provisions or cargo,” Delfaus said.

JHSVs are capable of transporting 600 tons of military troops, vehicles, supplies and equipment 1,200 nautical miles at a high average speed of 35 knots and can operate in shallow-draft, austere ports and waterways, providing U.S. forces added mobility and flexibility. The JHSVs’ aviation flight decks can support day and night flight operations. Each JHSV also has sleeping accommodations for up to 146 personnel and airline-style seating for up to 312.

One of the things Delfaus said he is most looking forward to in his role as master of the second JHSV is the new technology.

“The JHSV bridge functions more like a 747-cockpit than a traditional ship’s bridge. The design is for the officer to operate the entire ship from a chair. Everything you need to move the ship is available through an elaborate control panel. The navigation team also sits in the bridge, as does the engineering consul. It’s a very unique set-up – the rows of people make it look a bit like Star Trek.”

Following acceptance trials, delivery to the Navy and operational testing, Choctaw County will operate out of Little Creek, Va., and is expected to begin conducting missions for the Navy in the first quarter of fiscal year 2014.

The Navy’s current contract with Austal is for the construction of 10 JHSVs, one of which is yet-to-be awarded construction options.

As MSC assets, all of the JHSVs will be civilian-crewed. The first four of the 10 currently under contract – including Choctaw County and USNS Spearhead (JHSV 1) – will be crewed by federally employed civil service mariners, while the next six are slated to be crewed by civilian mariners working for private companies under contract to MSC. Military mission personnel will embark as required by the mission sponsors.