With the traditional words, “I christen you USNS Medgar Evers,” Myrlie Evers-Williams, the widow of the ship’s namesake, broke the traditional bottle of champagne against the bow of the ship. Evers was launched Oct. 29 and is scheduled for delivery to MSC in spring 2012.

Designated T-AKE 13, the 689-foot ship continues the Lewis and Clark-class tradition of honoring legendary pioneers and explorers. The ship is named in honor of slain civil rights leader and Army veteran Medgar Wiley Evers, who is especially remembered for his efforts to end segregation at the University of Mississippi in the 1950s and for his opposition to Jim Crow laws in the 1960s.

Evers was appointed Mississippi’s first NAACP field officer in 1954 and held the position until his assassination in the front yard of his Mississippi home the night of June 12, 1963, by White Citizens’ Council and Ku Klux Klan member Byron De La Beckwith. Evers’ murder, which occurred only hours after then-President John F. Kennedy delivered a televised, pro-civil rights speech, was mourned nationally.

“This technological marvel will carry the strong name of Medgar Evers, as well as the amazing spirit and expertise of the American people, across oceans and seas to every corner of the world,” said Navy Rear Adm. Mark H. Buzby, commander, MSC, to an audience of more than 1,000 people who braved the rainy morning to attend the event.

Ceremony attendees included the Evers family, NAACP and other civil rights leaders from around the country, Calif. Gov. Jerry Brown, distinguished guests from the U.S. military and maritime industry and NASSCO employees who built the ship.

“USNS Medgar Evers and its MSC civil service mariner crew will be indispensable to the Navy by daily performing the many tasks required to keep our combat fleets on station, ready to face any aggressor, anywhere in the world,” said Buzby.

“This is truly a wonderful day, one that will go down in the history books and one that will remain in our hearts forever,” said Evers-Williams in her remarks to the crowd. 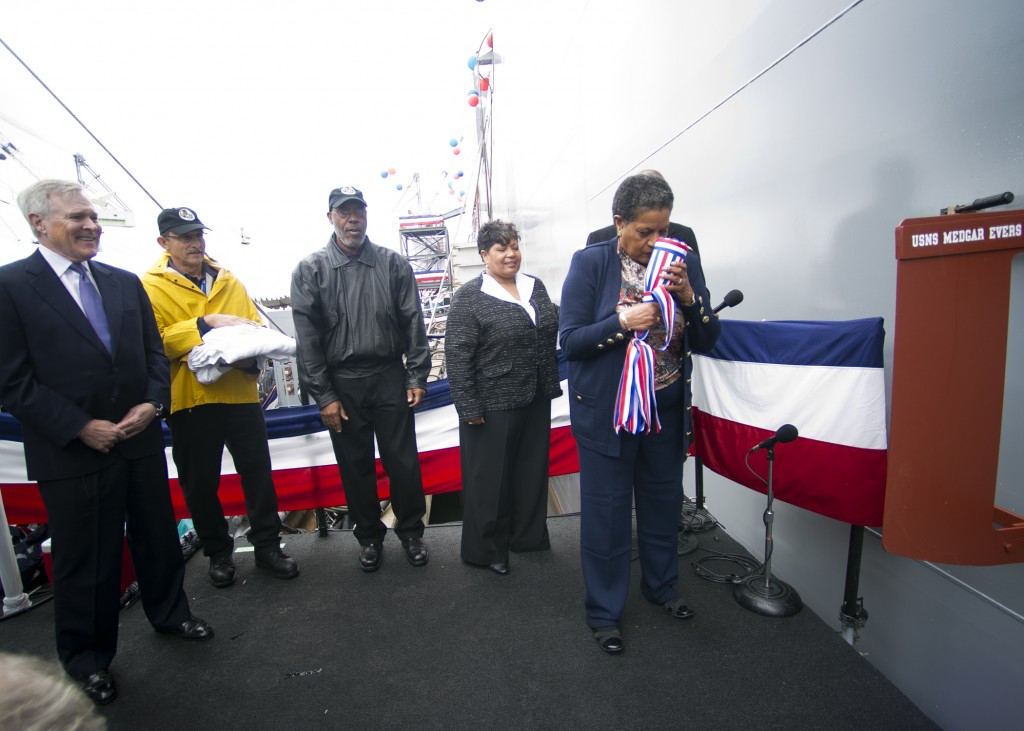