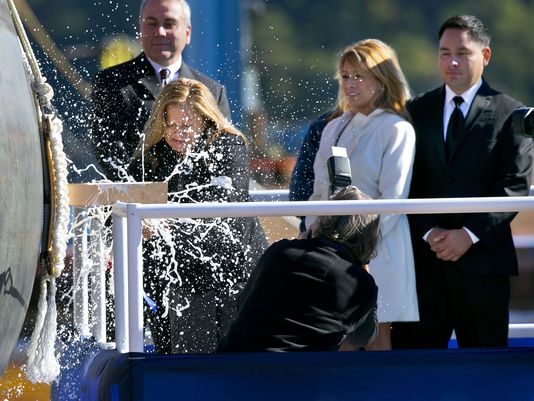 BATH, Maine — First in English, then in Spanish, the mother of a fallen Marine who shielded his comrades from an insurgent’s grenade christened a new Navy destroyer in his honor.

Rosa Peralta asked God to bless the ship named for her son, Sgt. Rafael Peralta, and to keep the crew safe before smashing a bottle of Champagne on the ship’s bow Saturday.

The ceremony at Bath Iron Works to christen the future USS Rafael Peralta paid homage to the slain Marine, who gave the ultimate sacrifice in service of a country to which he emigrated as a boy. He is believed to be the first serviceman born in Mexico to have a naval warship named in his honor.

Peralta was denied the Medal of Honor but awarded the Navy Cross, the nation’s second highest award for valor, after former Defense Secretary Robert Gates ruled the Marine lost consciousness after he was mortally wounded and his body smothered a grenade in Iraq in 2004, saving other lives. But the prevailing belief among the military is that Peralta pulled the grenade against his body to protect his fellow Marines during close combat with insurgents in Fallujah on Nov. 15 that year.

“He believed more about the goodness of America than most Americans, to the point of fighting and sacrificing everything for what America stands for,” Gen. Robert Neller, the Marine Corps commandant, said as he quoted from Peralta’s former commanding officer from the 1st Battalion, 3rd Marines, the Hawaii-based “Lava Dogs.”

Peralta came to the U.S. with his family, attended high school in San Diego then enlisted on the day he received his green card. He hung only three things on his wall: the Constitution, the Bill of Rights, and hisMarine boot camp graduation certificate.

Among Marines, Peralta is well known for his heroism.

The sergeant was nominated for the Medal of Honor — the nation’s highest military honor — after fellowMarines said he covered a grenade after being shot and wounded during close-quarters combat. Gates rejected the nomination, finding Peralta’s case didn’t meet the “proof beyond a reasonable doubt” standard for the honor because of questions about whether Peralta was too injured to understand what he did.

Instead, Gates honored the Marine with the Navy Cross. But supporters in Peralta’s hometown, on Capitol Hill and in the Navy persistently campaigned for the top award and Peralta’s mother wouldn’t accept the NavyCross until this summer as plans progressed to name the ship after her son.

Peralta’s family said naming the 510-foot guided-missile destroyer after the fallen Marine’s honor has eased some of the bitterness.

The Arleigh Burke-class destroyer is one of a handful of Navy ships to be named for Mexican-Americans.

The USS Gonzalez bears the name of Sgt. Alfredo Cantu Gonzalez, a Marine who was posthumously awarded the Medal of Honor for his actions in Vietnam. The cargo ship USNS Benavidez is named for another Medal of Honor recipient, Raul Perez Benavidez. There’s also a ship named for labor activist Cesar Chavez, a Navyveteran who died in 1993.

But historians at the U.S. Naval Institute believe the Peralta is the first warship named for someone who was actually born in Mexico, said Scot Christenson, spokesman in Annapolis, Maryland.

Bath Iron Works celebrated Peralta’s heritage by printing Saturday’s program in English and Spanish, a first for such an event. And several speakers directed their remarks to the Peralta family in Spanish.

As the ship’s sponsor, Peralta’s mother had the honor of christening the ship. Her daughters served as the ship’s matron and maid of honor. Her other son, Ricardo Peralta, a former Marine, said his brother epitomized the Marine Corps motto: Semper Fidelis, always faithful.

He described to the audience a letter he’d received from Peralta before his death, telling him not to worry and telling him to be proud of his country.

“He writes, ‘I’m proud to be a Marine, a U.S. Marine, and to protect and defend the Constitution of America.’ He said, ‘You should be proud of being an American citizen,'” he said.

Cmdr. Brian Ribota, commanding officer of the warship, said before the event that he relates to the ship’s namesake in a special way: His father was born in Mexico, as well, though Ribota was born in California.

“I can’t imagine growing up the way he did, coming across the border like he did, the sacrifices that he made,” Ribota said. “To everyone on our crew, he’s a hero. The bottom line is he’s an American hero.”