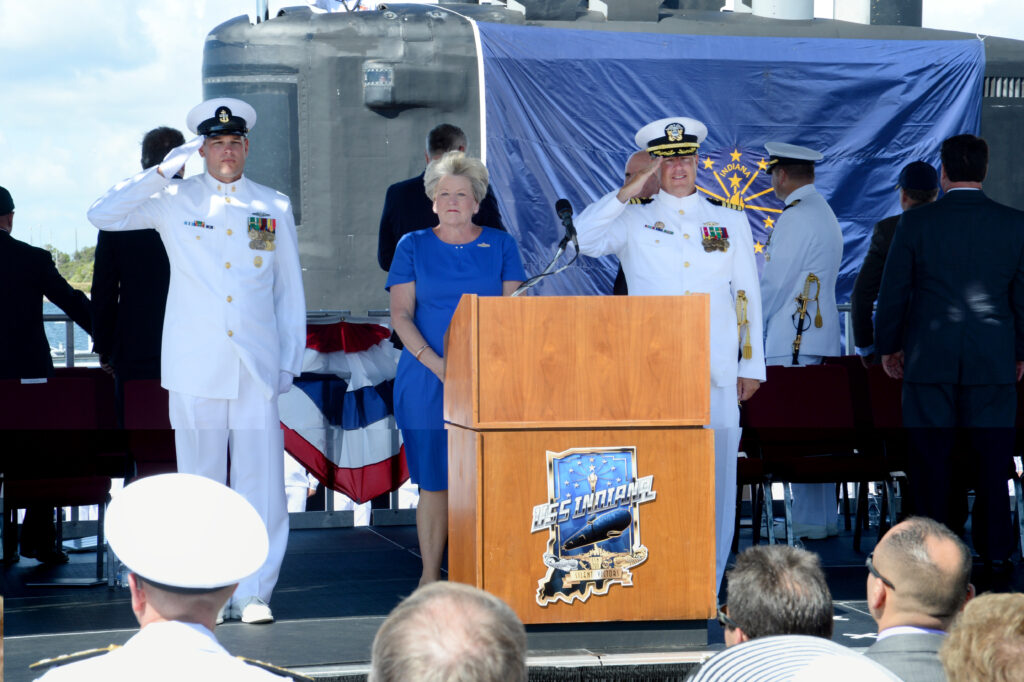 PORT CANAVERAL, Fla. (NNS) — USS Indiana, the third submarine to bear the name and third vessel to be named for the state, was brought to life by its sponsor, Diane K. Donald, wife of retired Adm. Kirkland Donald, the former director of Naval Nuclear Propulsion and commander, Submarine Forces, Sept. 29, 2018. Before giving the order to bring the ship to life, Indiana’s sponsor had a few words to impart to those in attendance and any potential future adversaries.

“Today we celebrate the time-honored tradition of placing USS Indiana into the service of our country. It has been the privilege of a lifetime to have a role in bringing this ship to life,” Donald said, addressing the crowd and ship’s company during the ceremony. “To anyone who wishes our nation harm, take heed, Indiana is taking the watch. Our new silent victors are Indiana strong.”

As the most modern and sophisticated attack submarine in the world, the submarine can operate in both littoral and deep ocean environments, and presents combatant commanders with a broad and unique range of operational capabilities. Indiana is a flexible, multi-mission platform designed to carry out the seven core competencies of the submarine force: anti-submarine warfare, anti-surface warfare, delivery of Special Operations Forces (SOF), strike warfare, irregular warfare, intelligence, surveillance and reconnaissance, and mine warfare.

“I owe everything to my crew,” said Capt. Jesse Zimbauer, commanding officer of Indiana, to those in attendance. “We have over 5,000 people in attendance today. You wouldn’t be out here if you didn’t have a lethal dose of patriotism. You cannot take a look at those Sailors dressed in their whites, standing on the backbone of the world’s newest and most lethal submarine and not just stand up and cheer!”

Indiana is a part of the Virginia-class’ third, or Block III, contract, in which the Navy redesigned approximately 20 percent of the boat to reduce acquisition costs. Indiana features a redesigned bow, which replaces 12 individual Vertical Launch System (VLS) tubes with two large-diameter Virginia Payload Tubes (VPTs) each capable of launching six Tomahawk cruise missiles, among other design changes that reduced the submarines’ acquisition cost while maintaining their outstanding warfighting capabilities. While the crew of the submarine may only be 140, Indiana Governor Eric J. Holcomb indicated that the “whole” crew may not fit on board.

“So, as you are serving on this boat, know that your crew is a lot bigger than you may think. In fact, I’d like to say that this crew is 6.6 million strong. Because there are, in fact, 6.6 million Hoosiers who are proud of this USS Indiana. We are proud of and pray for every Sailor that makes up this crew.”

After the ceremony, Indiana was opened up for tours to the general public, to include the crew’s mess, the wardroom, control, and the torpedo room. It is there perhaps that the words of the Director of Naval Reactors, Adm. J. Franklin Caldwell, Jr. stuck home to the thousands who wouldn’t normally step foot inside a nuclear-powered submarine.

“USS Indiana, and her sisters of the Virginia class, will maintain our edge in the undersea environment,” said Caldwell as he addressed the attendees. “Soon Indiana will deploy her stealth, endurance and her flexibility to travel silently under our oceans protecting our nation. She will be collecting intelligence, preparing for battle, and, if necessary, striking from the deep without notice to defend our nation.”

Indiana also has special features to support Special Forces, including a reconfigurable torpedo room which can accommodate a large number of personnel and all their equipment for prolonged deployments and future off-board payloads.

Also, in Virginia-class SSNs, traditional periscopes have been replaced by two photonics masts that host visible and infrared digital cameras atop telescoping arms, which are maneuvered by an Xbox controller. Through the extensive use of modular construction, open architecture and commercial off-the-shelf components, the Virginia class is designed to remain at the cutting edge for its entire operational life through the rapid introduction of new systems and payloads.

While USS Indiana may be the newest and most technologically advanced submarine in the world, to some, all the metal, tubes, wires and reactor are just machinery.

“The crew make up the soul of Indiana,” said Senior Chief Charles Simonds, Indiana’s chief of the boat. “Every single challenge this crew has been faced with, and there have been many over the past several months, has been dealt with extremely well. The crew are extremely proficient, extremely confident Sailors who know how to operate the submarine and I’d say that these guys are ready to go execute our nation’s missions right now, and that is a lot to say for a new crew, and that makes me very proud and extremely fortunate to be a part of this team.”

SSN-789 was built at Huntington Ingalls Shipyard in Newport News, Virginia, and is 7,800 tons and 377 feet in length, has a beam of 34 feet and operates at more than 25 knots submerged. It is designed with a nuclear reactor plant that does not require refueling during the planned life of the ship, reducing lifecycle costs while increasing underway time.

This entry was posted in Commissionings and tagged commissionings, uss indiana. Bookmark the permalink.