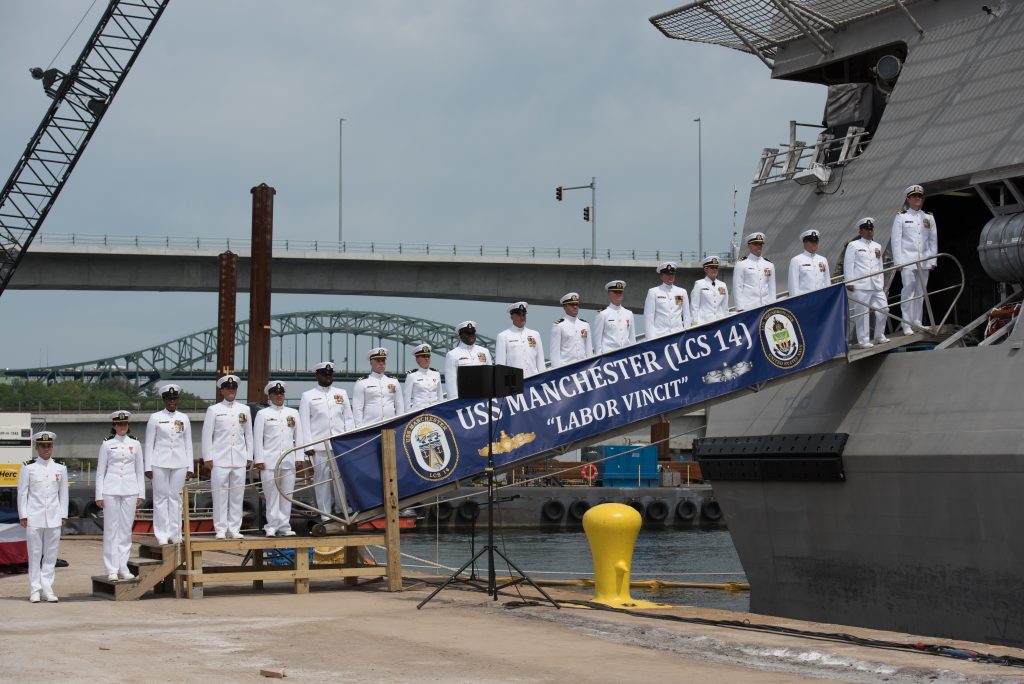 PORTSMOUTH, NH (May 26, 2018)
The crew of the Independence-variant littoral combat ship USS Manchester (LCS 14) man the rails during the ship’s commissioning ceremony after the ship’s sponsor, Sen. Jeanne Shaheen (D-NH) gives the traditional order to ‘man this ship and bring her to life.’ Manchester is the 12th littoral combat ship to enter the fleet and the seventh of the Independence variant. The ship is named for the city of Manchester, New Hampshire and is assigned to Naval Surface Forces, U.S. Pacific Fleet. (U.S. Navy photo by Mass Communication Specialist 2nd Class Jacob I. Allison/RELEASED)

The littoral combat ship USS Manchester (LCS 14) was commissioned as the Navy’s newest surface combatant in a ceremony in Portsmouth, New Hampshire, May 26.

The Independence-variant LCS is the Navy’s second ship to be named for the city of Manchester, New Hampshire.

“The faces of the Sailors that ran to man this ship are the faces that I’ve seen day after day for the last 22 months as we worked to bring this ship to life,” said Cmdr. Emily Basset, Manchester’s commanding officer and a Seattle, Washington native. “They took the city of Manchester’s motto – work conquers – and they have personified the spirit of our namesake city. Each Sailor is highly trained and must do the duties that three or four would do on another ship. These Sailors are reasons to make us all proud.”

The ship’s sponsor, Sen. Jeanne Shaheen (D-NH), gave the traditional order to, “Man this ship and bring her to life,” signaling the Sailors to embark and officially begin the ship’s service as a U.S. Navy ship.

For the ship’s crew, the day was the culmination of months’ worth of work to get the Manchester prepared for commissioning, and having the commissioning in the ship’s namesake state was a special opportunity for some of Manchester’s Sailors.

“It’s really amazing to be on a ship named for [a city in] my home state,” said Information Systems Technician 1st Class Laryssa Noyes, from Derry, New Hampshire. “It’s really quite an honor that I’m here for this. It’s awesome because my family got to be here and see what I do on a daily basis.”

After the ceremony the ship will transit to San Diego to join Commander, Littoral Combat Ship Squadron One (COMLCSRON ONE) and eight other LCS currently homeported at Naval Base San Diego.

Manchester is the 12th littoral combat ship and the seventh of the Independence variant.

The littoral combat ship is a high speed, agile, shallow draft, mission-focused surface combatant designed for operations in the littoral environment, yet fully capable of open ocean operations. As part of the surface fleet, LCS has the ability to counter and outpace evolving threats independently or within a network of surface combatants. Paired with advanced sonar and mine hunting capabilities, LCS provides a major contribution, as well as a more diverse set of options to commanders, across the spectrum of operations.