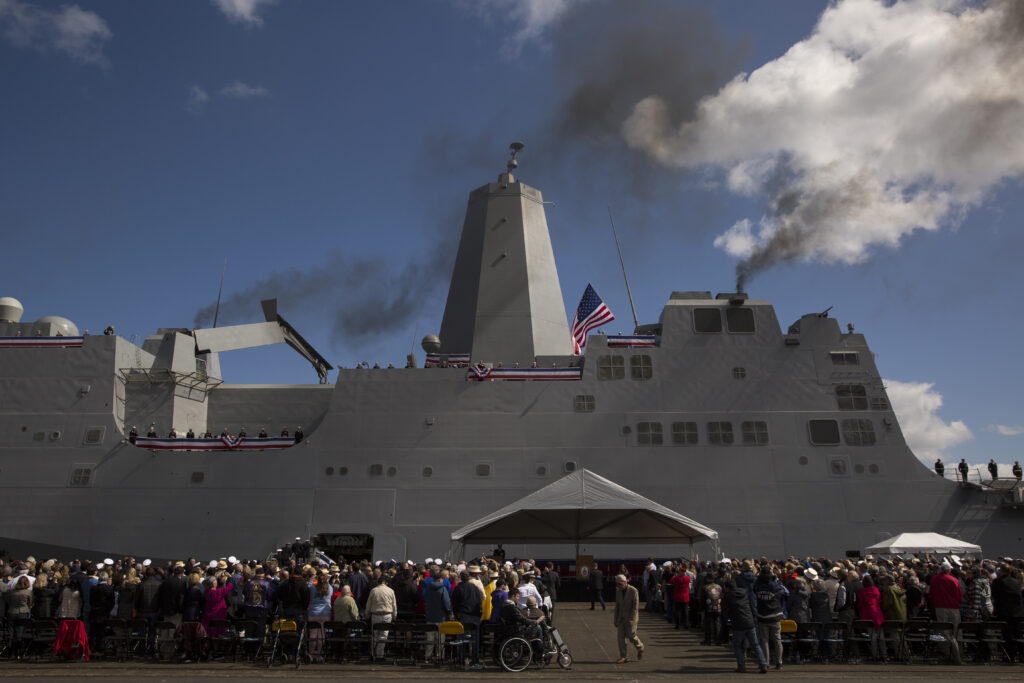 PORTLAND, Ore. — As medals adorning their chests clang with each running step, Sailors rush past the brow to man their vessel.

During an official commissioning ceremony held in front of over 5,000 guests, the crew of the USS Portland (LPD 27) brought their ship to life in Portland, Oregon, April 21.

“The City of Roses has a ship worthy of its creative spirit and industrious heritage,” proclaimed Shanahan. “The acceptance trials are over and her officers and crew are ready. Wherever her flag flies, in foreign ports, on the high seas, in weather fair or foul, this ship will carry the spirit of this city on the Columbia River.”

While addressing the audience, Shanahan emphasized the importance behind the naming of the Portland, while touching upon the history of the first two ships to carry the name ‘Portland’.

“This is the first ship to be named exclusively for Portland, Oregon,” said Shanahan. “Her officers and crew will write the next chapter, and do so with pride. This ship will carry our power and goodwill anywhere they are needed.”

Since departing Pascagoula, Miss. the ship and her crew have sailed 9,930 nautical miles, conducted a crossing the line ceremony, and sailed through the historic Panama Canal on their way to their designated homeport of San Diego.

“Since Dec. 1775, commissioning ceremonies have been an honored Naval tradition celebrating, accepting, and welcoming a new ship into the fleet,” said Capt. J. R. Hill, Portland’s commanding officer. “When USS Portland was brought to life during today’s ceremony, I was humbled as I thought back to the dedication and passion the crew demonstrated throughout our journey to this culminating moment.”

Speaking on behalf of the Chief of Naval Operations (CNO) Adm. John Richardson, deputy CNO Vice Adm. Dixon Smith went down memory lane, recalling the history of the Oregon Shipyard, which during the height of World War II launched 24 ships in only 30 days.

“The USS Portland has joined the ever growing list of reasons for Portlanders to be proud,” said Smith. “The men and women of this crew come from all across the nation and will soon sail, perhaps into harm’s way, to keep us safe here at home.”

Upon conclusion of the ceremony, guests were invited to tour the 684-foot war fighting vessel, where they could experience the state of the art design that will continue to sail decades from today with future generations of Sailors and Marines aboard.

“Portland’s motto, ‘First Responders, Brave and Determined’ made having the ceremony in Portland — with the city’s first responders present — even more meaningful for all in attendance,” said Hill.

Prior to commissioning, Portland underwent multiple phases to prepare her join the fleet.

The ship’s formal recognition of transition from concept to reality began Aug. 2, 2013 at Huntington Ingalls Shipbuilding during the keel laying ceremony when the ship’s sponsor, Bonnie Amos, engraved her name upon a plaque, as a symbol authenticating the keel.

A mast stepping ceremony was then held May 20, 2016. This time-honored Naval tradition symbolizes the moment a shell becomes a ship, and her crew honors that tradition by placing mementos into a time capsule for future Portland Sailors to discover.