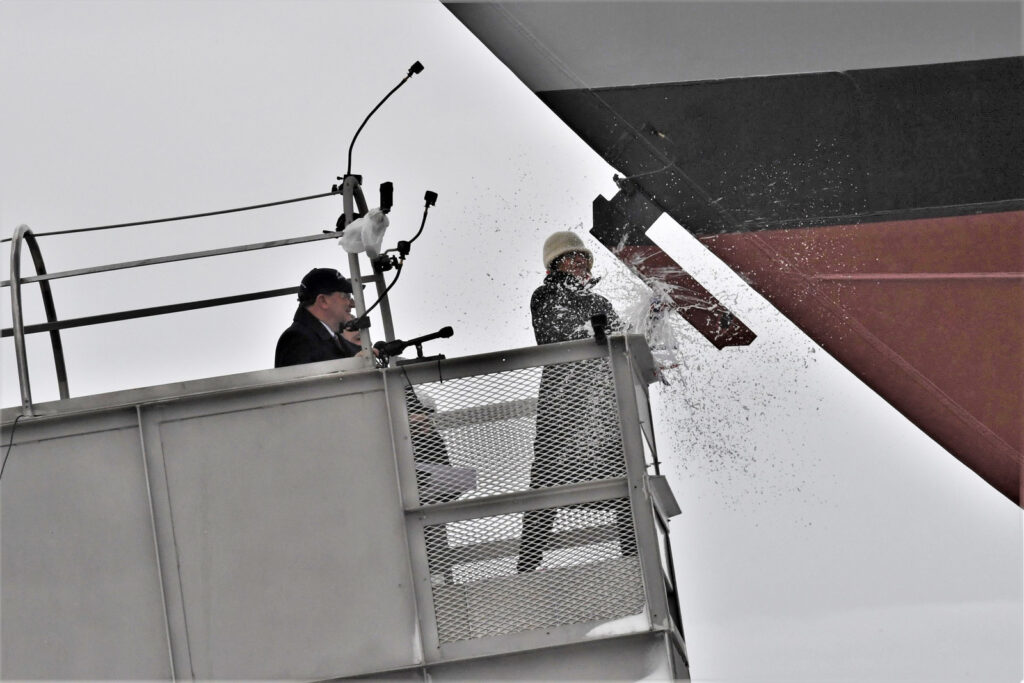 Ship sponsor Jill Donnelly breaks a bottle of champagne across the bow during the christening ceremony for the nations 17th Littoral Combat Ship, the future USS Indianapolis, at the Fincantieri Marinette Marine shipyard on April 14. (PRNewsfoto/Lockheed Martin)

“As a native Hoosier and the daughter of two World War II veterans, there is no greater honor than to serve as the sponsor of the future USS Indianapolis,” Donnelly said. “This ship pays tribute to the legacy of brave and resilient sailors, and I know the people of Indianapolis – and all Hoosiers – will support this ship and her future crews for decades to come.”

The future USS Indianapolis is named in honor of the incredibly brave men and women in uniform who have served our country for generations and who continue to serve today. LCS 17 will be the fourth U.S. Navy ship to bear the Indianapolis name. She will undergo additional outfitting and testing at Fincantieri Marinette Marine before her anticipated delivery next year.

“The Freedom-variant LCS is flexible and capable, and plays a critical role in the U.S. Navy’s fleet,” said Joe DePietro, vice president, Small Combatants and Ship Systems at Lockheed Martin. “With an active production and testing, we are committed to delivering Indianapolis and her highly capable sister ships into combatant commanders’ hands quickly.”

The Lockheed Martin-led industry team is currently in full-rate production of the Freedom-variant of the LCS, and has delivered five ships to the U.S. Navy to date. The future USS Indianapolis is one of eight ships in various stages of construction at Fincantieri Marinette Marine, with one more in long-lead production.

The Lockheed Martin-led LCS team is comprised of shipbuilder Fincantieri Marinette Marine, naval architect Gibbs & Cox, and more than 800 suppliers in 42 states. The LCS is the Navy’s most affordable surface combatant shipbuilding program.

The Freedom-variant’s steel monohull design is based on a proven, resilient design recognized for its stability and reliability.

This entry was posted in Christenings and tagged christening, christenings, uss indianapolis. Bookmark the permalink.