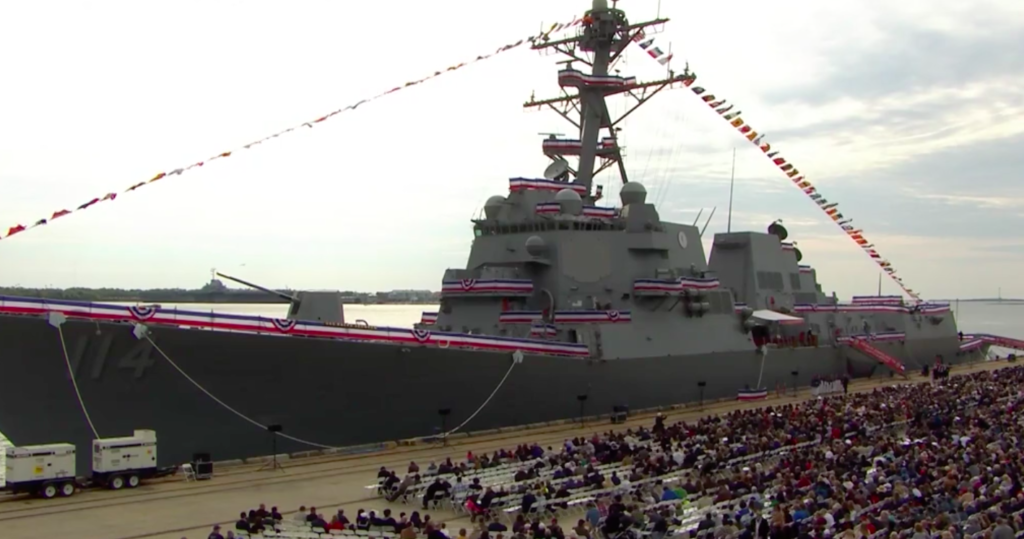 U.S. Sen. Tim Scott stood atop the deck of the massive gray warship docked in Charleston Harbor on Saturday morning and asked members of the crowd to transport themselves back to 1968 — a time of social strife amid the civil rights movement.

Out of that period and out of Charleston, a city with its own history of racial issues, comes a singular story: that of Pfc. Ralph Johnson, a Marine who was killed in Vietnam after jumping on a grenade that landed in his fighting hole, Scott said. His actions cost him his life but saved two fellow Marines and earned him the Medal of Honor, the nation’s highest military decoration.

“Ralph began a legacy that should last through eternity,” he said.

Scott, R-S.C., was among several speakers at a commissioning ceremony for the USS Ralph Johnson, the Navy’s newest destroyer. A crowd of about 6,000 gathered to watch as the ship officially came on duty for the first time.

During the ceremony, many spoke about Johnson’s sacrifice and the legacy that the 19-year-old left after he dove belly-first onto the grenade and shouted a warning to others.

“I am proud to serve a city that could produce such an extraordinary man,” Charleston Mayor John Tecklenburg told the crowd.

Helen Richards, Johnson’s sister, said she and her family are honored to have the ship named after their relative and said two of his grandnieces and a niece are currently serving active duty in the military. Another niece retired from the Air Force.

“It was stated that the crew takes on the spirit of the namesake, which I personally witnessed upon the embarkment of the (USS Ralph) Johnson,” Richards said. “On behalf of the Johnson family, we are both inspired and forever grateful for the generosity of love shown toward us.”

U.S. Rep. Mark Sanford said Johnson’s sacrifice should prompt all who know of his story to look at themselves and ask, “How then do I live?”

The 509-foot warship is the Navy’s 64th Arleigh Burke-class destroyer. It carries two helicopters, missiles, torpedoes and up to 338 crew members. Its top speed is 35 mph.

Gen. Robert Neller, Marine Corps commandant, spoke about the ship’s capabilities and how it will carry on the spirit of bravery exemplified by Johnson.

“This ship was designed to fight,” Neller said. “It’s here to go fast and in harm’s way, and that’s what we expect. … As long as we have citizens like Ralph Johnson, we’re going to be just fine.”

This entry was posted in Commissionings and tagged commissionings, uss ralph johnson. Bookmark the permalink.