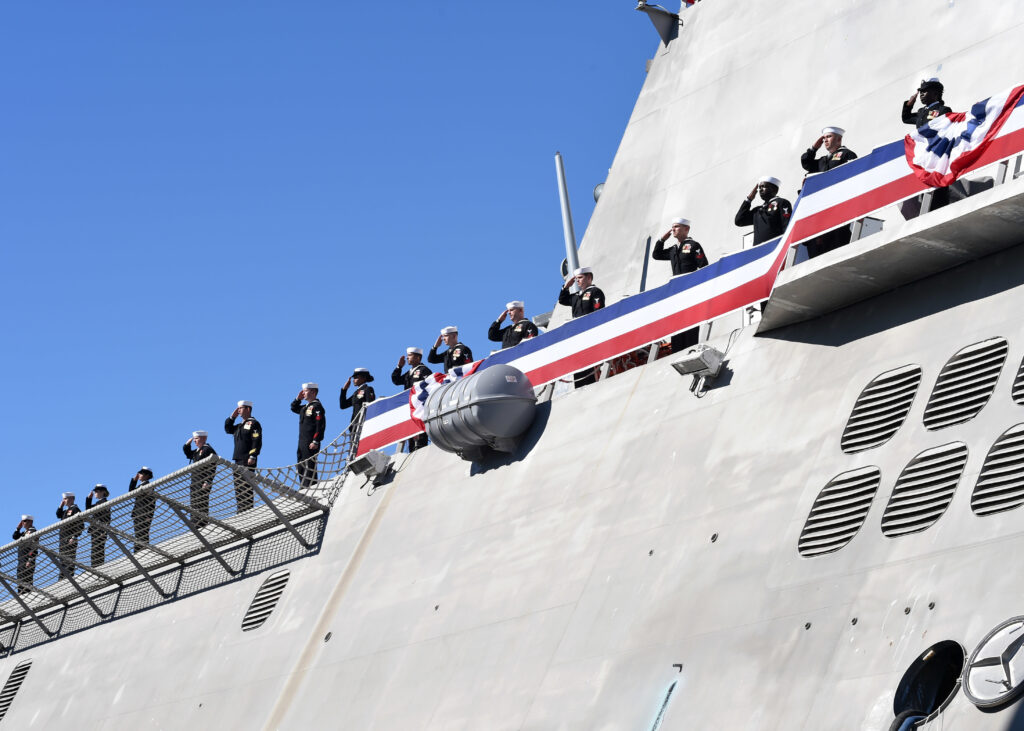 SAN DIEGO (Feb. 3, 2018) Sailors assigned to littoral combat ship USS Omaha (LCS 12) salute as they man the rails during the ship’s commissioning ceremony at Broadway Pier in downtown San Diego. Omaha is the 11th littoral combat ship to enter the fleet and the sixth of the Independence variant. The ship is named for the city of Omaha, Nebraska and is assigned to Naval Surface Forces, U.S. Pacific Fleet. (U.S. Navy photo by Mass Communication Specialist 1st Class Melissa K. Russell/Released)

The new Independence variant littoral combat ship is the Navy’s fourth vessel named in honor of the patriotic, hard-working citizens of Omaha, Nebraska for their support of and contributions to the military.

“It is a great honor and privilege to be her commanding officer and to take such a beautiful ship to sea,” said Cmdr. Michael Toth, commanding officer, USS Omaha (LCS 12). “No captain has ever had a harder working, more motivated crew, and I couldn’t be prouder of them.”

Susan “Susie” Buffett, the ship’s sponsor, is a known philanthropist in Omaha, Nebraska and the daughter of Warren Buffett. Susie gave the order for ship’s crew to “man this ship and bring her to life,” signaling 69 Sailors to run aboard the ship and officially begin its life.

As part of bringing the ship to life, one of the crew’s hard working Sailors, Boatswains Mate 2nd Class Jamila Smith, of Brooklyn, New York, broke the ship’s commissioning pennant and the flag of the Secretary of the Navy.

“It was an honor to raise the flags. From the ship I was able to see the crowd turnout and see that everyone is excited to help welcome us into San Diego and help us commission the ship,” said Smith. “We’re thankful for everything that our sponsor and the commissioning committee did for us and we’re happy so many came out to help us pull this off.”

Many attendees said they were honored and deeply moved to be able to bear witness to such a momentous event and time honored naval traditions.

“It made me cry. It was really emotional,” said Bill Grohs whose son-in law Lt. Dustin Crawford is the ship’s combat systems officer. “I’m so proud of Dustin and the rest of the crew. I’m looking forward to seeing what this ship does.”

LCS is a high speed, agile, shallow draft, mission-focused surface combatant designed for operations in the littoral environment, yet fully capable of open ocean operations. As part of the surface fleet, LCS has the ability to counter and outpace evolving threats independently or within a network of surface combatants. Paired with advanced sonar and mine hunting capabilities, LCS provides a major contribution, as well as a more diverse set of options to commanders, across the spectrum of operations.

The LCS-class consists of the Freedom-variant and Independence-variant, designed and built by two industry teams. The Freedom-variant team is led by Lockheed Martin (for the odd-numbered ships, e.g. LCS 1). The Independence-variant team is led by Austal USA (for LCS 6 and follow-on even-numbered ships). Twenty-nine LCS ships have been awarded to date: 11 have been delivered to the Navy, 15 are in various stages of construction and three are in pre-production states.

This entry was posted in Commissionings and tagged commissionings, uss omaha. Bookmark the permalink.