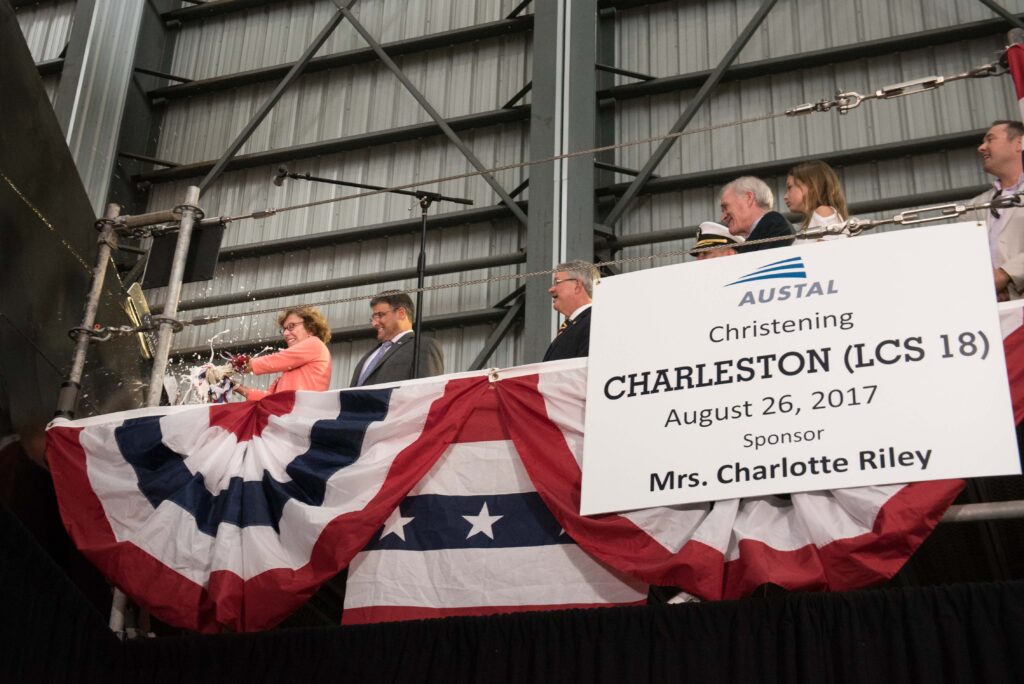 MOBILE, Ala. (Aug. 26, 2017) Ship’s sponsor Charlotte Riley breaks a bottle of champagne across the bow during the christening ceremony for the littoral combat ship USS Charleston (LCS 18). At the ceremony, Secretary of the Navy (SECNAV) Richard V. Spencer gave the principal address. Spencer is in the area to view the ongoing shipyard work at Austal USA and meet Sailors and civilian employees who support the Navy. (U.S. Navy photo by Mass Communication Specialist 1st Class Armando Gonzales/Released)

(This article originally appeared on al.com)

Among those in attendance at the christening ceremony were Navy Secretary Richard V. Spencer and Charlotte Riley, sponsor of the future USS Charleston (LCS 18).

The ship, which is part of Austal’s $3.5 billion contract with the U.S. Navy, is named for Charleston, the oldest city in South Carolina.

“Today marks another major milestone with the christening of this remarkable warship,” said Austal USA President Craig Perciavalle in a news release. “Our talented shipbuilding team is honored to provide our Navy with an extraordinarily capable vessel that will honor the great city of Charleston as she operates around the world.”

Austal said the LCS program is at full-rate production, delivering two ships a year and is continuing its momentum at Austal USA with seven ships currently under construction:

At today’s ceremony, Riley headlined the group of officials, naval guests, civic leaders, community members and Austal employees in Austal’s final assembly bay. Riley moved to Charleston in 1965 where she met her husband, Joseph P. Riley, Jr., who led the city of Charleston for 40 years beginning in 1975 when he was first elected Mayor, according to Austal.

Riley, an active community volunteer, began in the Junior League of Charleston and served as a tutor in remedial reading for a school for troubled boys, serving on their board for a number of years. She also served on the Big Brothers Big Sisters board, as well as the board for Charleston’s homeless shelter. As a volunteer for her church, Mrs. Riley supported Meals on Wheels and presently serves on their altar guild.

This entry was posted in Christenings and tagged christenings, uss charleston. Bookmark the permalink.