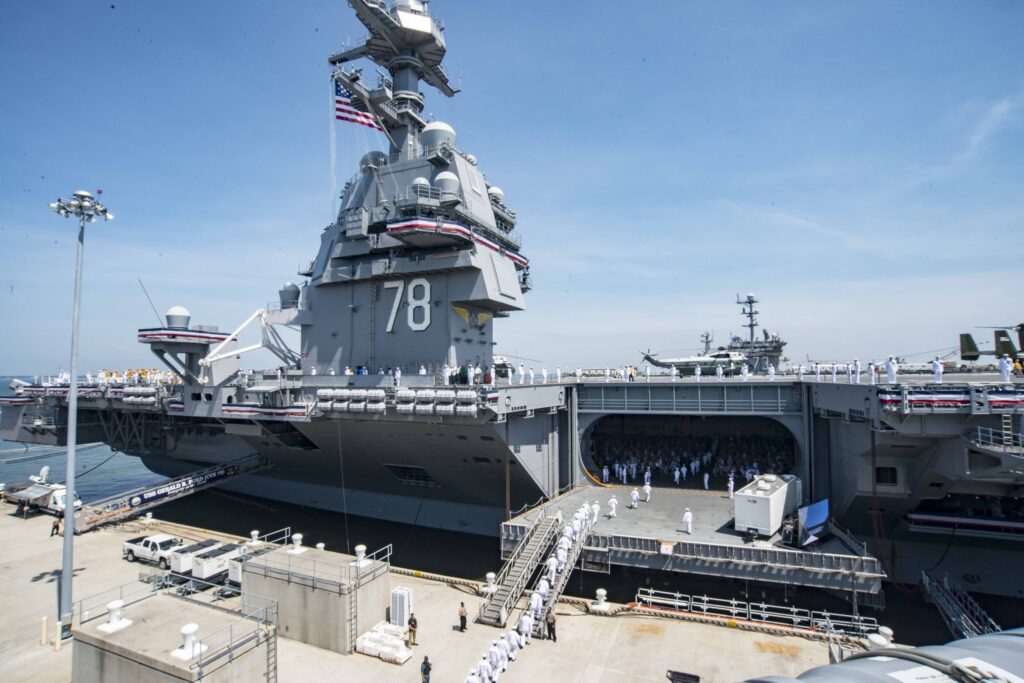 A commissioning is a day of celebration, and honors the dedication, team work, and collaboration of Sailors, legislators, shipbuilders, program managers, and the ship’s sponsor in delivering the ship to the fleet.

Trump landed on the flight deck in Marine One and was greeted by Secretary of Defense James Mattis, Acting Secretary of the Navy Sean Stackley, Chief of Naval Operations Adm. John Richardson, and USS Gerald R. Ford Commanding Officer Capt. Rick McCormack.
Over 10,000 friends and family members attended the event, watching the festivities from the hangar bay, the pier and USS Dwight D. Eisenhower (CVN 69).

Distinguished members of the party offered remarks to honor the occasion.

“Wherever this vessel cuts through the horizon, our allies will rest easy and our enemies will shake with fear because everyone will know that America is coming and America is coming strong,” said Trump. “Our true strength is our people. Our greatest weapon is all of you. Our nation endures because we have citizens who love America and who are willing to fight for America.”

He continued, “We are so very blessed with warriors who are willing to serve America in the greatest fighting force in history, the United States military. Today this ship officially begins its role in the noble military history of our great nation.”

After the ship’s sponsor and President Ford’s daughter Susan Ford Bales gave the traditional command to “Man our ship and bring her to life,” Ford Sailors ran up the brows and manned the rails as the band played “Anchor’s Aweigh.”

McCormack expressed his pride in the work his crew has done to get the ship ready to serve in the fleet.

“The Sailors aboard today are among our nation’s finest,” said McCormack. “They are talented, driven, innovative, dedicated, and passionate about what they do and I am very proud to be their commanding officer. Team Wolverine, I have the utmost faith and confidence in your abilities to handle any challenge ahead, and I can think of no better team to take this ship to sea.”

After the ceremony, the ship was opened to the general public for tours, which included the flight deck, the commanding officer’s in-port cabin, pilot house, mess decks, fo’c’sle, and the newly opened tribute room.

USS Gerald R. Ford (CVN 78) is the lead ship in the Ford-class of aircraft carrier, the first new class in more than 40 years, and will begin the phased replacement of Nimitz-class carriers.

CVN-78 honors the 38th president of the United States and pays tribute to his lifetime of service in the Navy, in the U.S. government and to the nation. During World War II Ford attained the rank of lieutenant commander in the Navy, serving on the light carrier USS Monterey (CVL 26). Ford became president in the aftermath of the Watergate scandal and served in the country’s highest office from 1974-1977.

This entry was posted in Commissionings and tagged commissionings, uss gerald r ford. Bookmark the permalink.