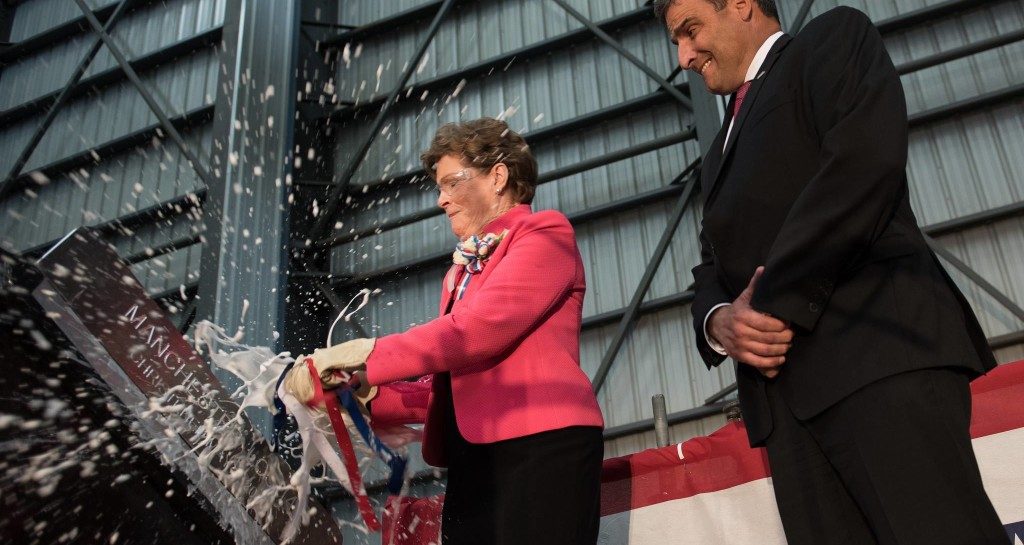 Manchester (LCS 14) is the fifth LCS in Austal’s 11-ship, contract worth over $3.5 billion. With its shallow draft of 14 feet, the Austal-built Independence-variant LCS is an advanced high-speed and agile 419-foot aluminium trimaran combat ship that combines superior seakeeping, endurance and speed with the volume and payload capacity needed to support emerging missions.

“On behalf of Austal USA’s shipbuilding team, one of the most talented that I’ve ever worked with, we are proud to provide our sailors with an amazing warship that will honor the great city of Manchester as she defends our nation,” said Austal USA President Craig Perciavalle. “We’re equally excited to share this celebration with an amazing patriot in Senator Shaheen who has served in her role as both Governor and Senator, and now gives her spirit as the sponsor to this awesome ship.”

Shaheen, the only woman in U.S. history to be elected both a Governor and a United States Senator, has served in the Senate since 2009. She has been committed to serving the citizens of New Hampshire for decades and is known for her common-sense leadership, hard work and dedication to improving the lives of the middle class  As New Hampshire’s Governor, Shaheen helped create nearly 67,000 new jobs while keeping New Hampshire’s tax burden the lowest in the country. She and her husband, Bill – a New Hampshire native – live in Madbury and have three daughters, Stefany, Stacey and Molly (Matron of Honor), and seven grandchildren.

Traditionally, the christening of a ship is where the ship’s sponsor blesses the ship by breaking the bottle of champagne on the bow of the ship and ceremonially gives the ship its name. The roll of sponsorship represents a lifelong relationship with the ship and her crew.

The future USS Manchester (LCS 14), will launch in mid-May and is scheduled for delivery in 2017. She has a maximum speed of more than 40 knots, a voluminous 28,000 sf mission bay, and a flight deck capable of simultaneously holding two H-60 helicopters.

The company has also been contracted by the U.S. Navy to build 10 Expeditionary Fast Transports (EPF). Of the 10 ships included in the $1.6 billion block-buy contract, six have been delivered.

This entry was posted in Christenings and tagged christenings, uss manchester. Bookmark the permalink.