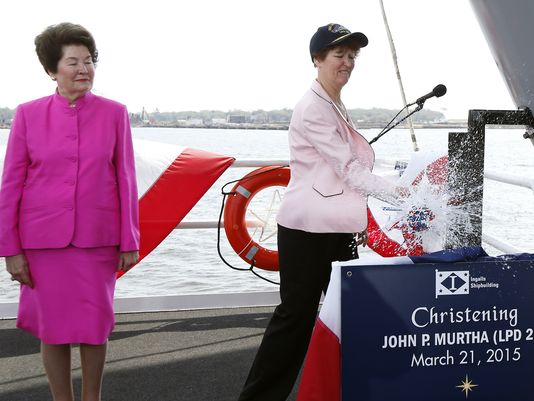 Story from The Maritime Executive

The ship is named in honor of John P. Murtha, who served his country both as a marine and in the halls of congress. Murtha served in the Marine Corps for 37 years and saw service in the Korean War and in Vietnam, a tour that earned him the Bronze Star with Valor device, two Purple Hearts and the Vietnamese Cross of Gallantry. Murtha represented Pennsylvania’s 12th Congressional District from 1974 until his death in 2010.

The Honorable Nancy Pelosi, Democratic Leader of the United States House of Representatives, delivered the ceremony’s principal address. Ms. Donna Murtha, daughter of John P. Murtha, is the ship’s sponsor, and in accordance with Navy tradition, broke a bottle of sparkling wine across the bow to formally christen the ship.

“This ceremony and this ship honor a man who dedicated his entire adult life to service—service as a Marine and as a member of Congress,” said Secretary of the Navy Ray Mabus. “This dedication to service will live on in the future USS John P. Murtha as it serves as a symbol of all Chairman Murtha believed in. This ship also represents the dedication to service demonstrated by the men and women who have worked so diligently in her construction, men and women without who this day would not be possible.”

John P. Murtha will provide improved warfighting capabilities, including an advanced command-and-control suite, increased lift capability, in vehicle and cargo carrying capacity and advanced ship survivability features. The ship is capable of embarking a landing force of up to 669 troops and a surge capacity of up to 800.

The ship will be crewed by 381 officers, enlisted personnel and Marines. The 24,900-tonJohn P. Murtha is being built at the HII shipyard. The ship is 684 feet in length, has an overall beam of 105 feet, and a navigational draft of 23 feet. Four turbo-charged diesels power the ship to sustained speeds of 22 knots.