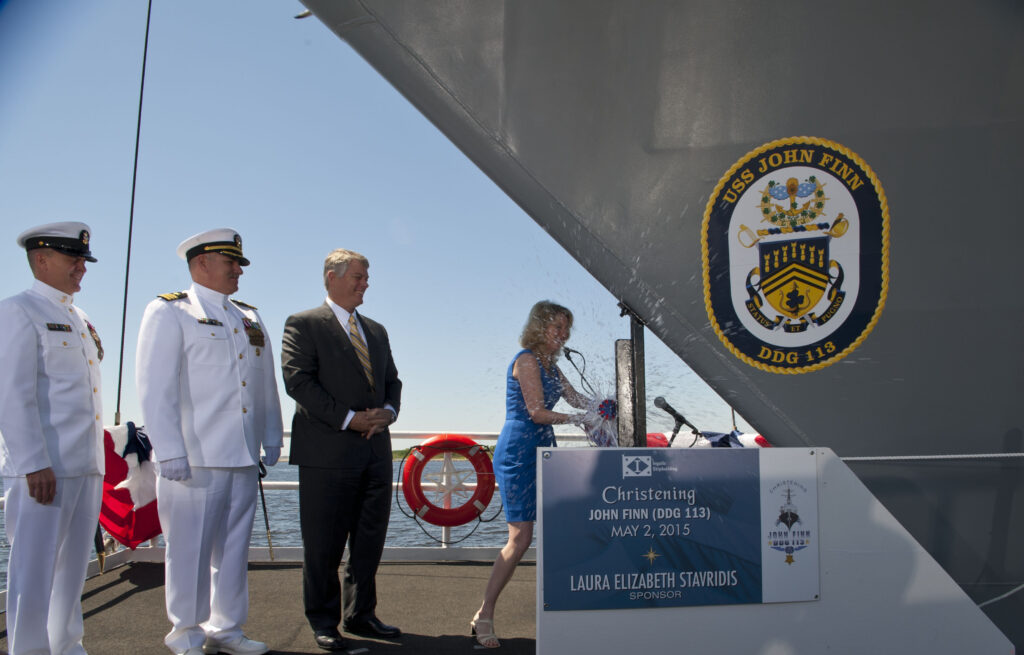 150502-N-OT964-276 PASCAGOULA, Miss. (May 2, 2015) Ship sponsor Laura Stavridis ceremoniously breaks a bottle of champagne on the bow during the christening ceremony for the future guided missile destroyer USS John Finn (DDG 113). The ship is named after the Medal Of Honor Recipient and prior Aviation Ordnanceman Chief John Finn who survived and fought during the attack on Pearl Harbor. (U.S. Navy photo by Mass Communication Specialist 1st Class Martin L. Carey/Released)

DDG 113 is named John Finn after the first Medal of Honor recipient of World War II. Finn received the honor for machine-gunning Japanese warplanes for over two hours during the December 1941 attack on Pearl Harbor despite being shot in the foot and shoulder and suffering numerous shrapnel wounds. He retired as a lieutenant after 30 years of service and died at age 100 in 2010.

“I often speak to the members of the Chief Petty Officer Mess about the characteristics of a leader and, more specifically, the characteristics I expect to see in my chiefs,” said Master Chief Petty Officer of the Navy Michael Stevens, who was the principal speaker. “I tell them that a model chief petty officer is a quiet, humble and servant leader. I believe with all my heart that John Finn exemplified all of these traits through his heroic actions that day.”

Laura Stavridis, wife of Adm. James Stavridis (U.S. Navy, Ret.) and DDG 113 ship sponsor, smashed a bottle of sparkling wine across the bow of the ship, officially christening DDG 113 as John Finn. “God bless this ship and all who sail on her,” she said.

“Finn outlived 14 fellow sailors who earned the Medal of Honor for their service in World War II,” said Mike Petters, HII’s president and CEO. “Unfortunately, he didn’t live long enough to know that a Navy ship would be named after him. I think he would be as humbled by this honor as he was with the title of hero bestowed upon him. Just remember his words: ‘There’s all kinds of heroes.’ And if you ask me, this ship was built for heroes by heroes. All in the name of freedom.”

“Rest assured these shipbuilders—Ingalls shipbuilders—understand their noble calling,” said Ingalls Shipbuilding President Brian Cuccias. “To build ships like John Finn safe, strong and proud for the sailors and Marines who sail in her, with strength pride and our deepest gratitude and respect.

“The future USS John Finn is the first destroyer built at Ingalls after the Navy restarted the program,” Cuccias continued. “We hit the ground running with the new program, re-establishing the best destroyer team in the world with many best-in-class achievements, and this is already proven, as DDG 113 was launched three weeks ahead of schedule.”

Arleigh Burke-class destroyers are highly capable, multi-mission ships that can conduct a variety of operations, from peacetime presence and crisis management to sea control and power projection, all in support of the United States’ military strategy. They are capable of simultaneously fighting air, surface and subsurface threats. The ship contains myriad offensive and defensive weapons designed to support maritime defense needs well into the 21st century.

“I have said it many times, and I mean it every time I say it … Gulf Coast shipbuilders build the greatest warships the world has ever seen,” said Rep. Steven Palazzo, R-Miss. “Your craftsmanship is beyond compare, and I know that you all care very deeply about the work you do, because you know how important your work is to our national security and keeping America and our loved ones safe. No matter how many times I see these ships grow from steel plate into the great ship you see here today, I still believe it is an absolute modern marvel.”