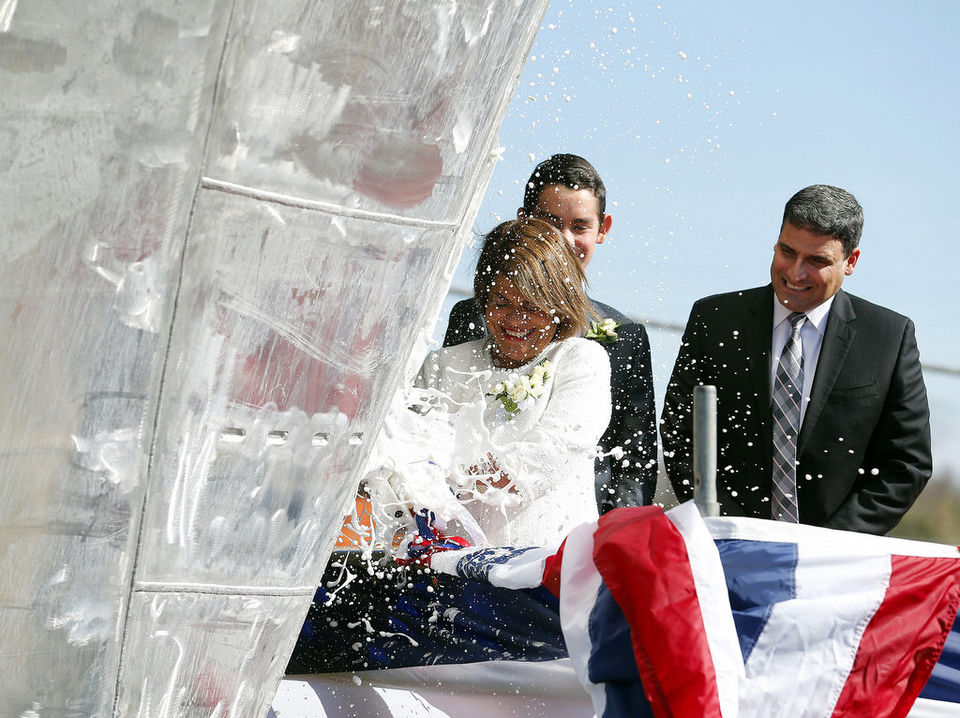 MOBILE, Alabama — “Give her a nice hard whack,” was the advice Craig Perciavalle, president of Austal USA, imparted to the sponsor of the USNS Trenton. Standing at the edge of a platform, Virginia Kamsky hurled the champagne bottle against the bow of the ship, breaking it after a second swing.

The ceremony held at Austal’s shipyard early Saturday was the fifth such occasion, blessing another one of the U.S. Navy’s joint high speed vessels. Several local and state lawmakers gathered for the ceremony at the shipbuilder’s facility on the Mobile River.

Perciavalle said the growth over the last 6 years now leaves the shipyard as the fifth largest in the country, and the largest aluminum shipbuilder in the world. Four joint high speed vessels — Spearhead, Choctaw County, Fall River and Millinocket — have already been delivered.

“The first ship named Trenton had one of the most impacting innovations in naval history, ” Perciavalle said.

A wooden-hulled steamer active in the late 1800s, Perciavalle said the first USS Trenton changed Navy ships forever when it became the first vessel in the Navy to successfully use electrical lighting, leading to the installation of electricity on all new Navy ships that followed.

“I know the ship you see here today will be equally as innovative in its own way,” he said.

Eric Jackson, mayor of Trenton, N.J. expressed delight that the vessel was named after the city he was elected to lead. Jackson and other officials got a closer look at the military ship while touring the vessel this week.

Jackson said the experience was akin to what he imagines a spaceship is like with “all the latest technology” on board. “When I was on the bridge it really put me in the mindset of the Enterprise on Star Trek,” Jackson said. “It’s highly technical; it’s just a magnificent piece of highly-advanced technology.”

The joint high speed vessel is designed to transport as many as 600 short tons of cargo at an average speed of 35 knots. The ship is a non-combat vessel that operates with a crew of 22 men and women, carrying supplies to hard to reach locations.

“It’s my hope that some time in the next two years this great ship will find it’s way up the Northeast corridor — even into the Delaware (River) — because it’s a low shallow hull,” Jackson said, “or into the Philadelphia shipyard where we can bring the residents of Trenton to see this great vessel.”

“Well, I get a lot of suggestions — I’ll put it that way,” he said. “You try to get diversity and you try to pick places that have not had ship’s named in a while…it’s places that also mean a lot not just to the state, but also to America.”

Three other ships have been named for the capital city of New Jersey. The first launched in 1876, operating primarily in Europe and the Mediterranean Sea. The second was a light cruiser launched in 1923. That ship helped to evacuate U.S. citizens from Spain during the Spanish Civil War.

And the third, an amphibious transport dock, was launched in 1968 after which it helped to relocate citizen during the Lebanon War in 2006. That vessel was sold to the Indian Navy for $44 million in 2007 and rechristened the INS Jalashwa.

“I try to look at cities that have meant something in American history,” Mabus said, “places that are very patriotic that send a lot of people to our military.”

Among historians the city is well known as the place where George Washington won his first military victory on December 26, 1776, crossing the Delaware River to defeat the Hessian troops at the dawn of the American Revolutionary War.

“I think it’s fair to say that without Trenton and Princeton later on, the revolution might have gone a little different that day,” Mabus said.