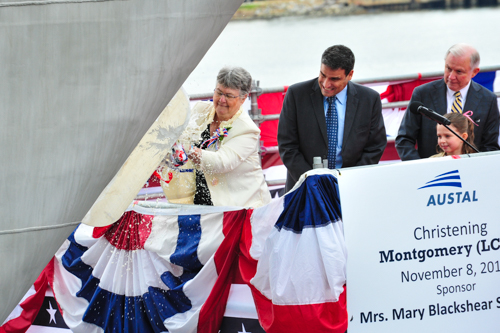 Austal USA and the US Navy celebrated the christening of the future USS Montgomery (LCS 8) this morning as ship sponsor, Mary Blackshear Sessions, broke the ceremonial champagne bottle on the bow of the ship in Austal’s shipyard in Mobile, Alabama.

By COMLCSRON ONE Public Affairs Office

The Navy christened littoral combat ship (LCS) Montgomery, Nov. 8, during a ceremony at the Austal USA shipyard in Mobile, Ala.

Adm. Michelle Howard, vice chief of naval operations, delivered the principal address at the ceremony. Mary Sessions, wife of U.S. Sen. Jeff Sessions, R-Ala), served as the ship’s sponsor. The ceremony was highlighted by Mary Sessions breaking a bottle of sparkling wine across the bow to formally christen the ship, which is a time-honored Navy tradition.

The selection of Montgomery honors the capital city of Alabama, and will be the second ship to bear the city’s name.

“As we christen the future USS Montgomery, we not only celebrate a great Southern capital, but also the highly skilled and dedicated shipbuilders who have worked so hard to bring this day to fruition,” Navy Secretary Ray Mabus said. “Their efforts have ensured that this great ship, an irreplaceable platform in our future Navy and our eighth littoral combat ship, will represent the city of Montgomery, Alabama, and our nation, around the world for years to come.”

Designated LCS 8, Montgomery is designed to operate in shallow water environments to counter challenging threats in coastal regions, specifically mines, submarines and fast surface craft. The ship is capable of speeds in excess of 40 knots and can operate in water less than 20 feet deep. Montgomery will address critical capability gaps in the littorals. Carrying out the Navy’s mission, it will serve to enhance maritime security by deterring hostility in troubled waters, maintaining a forward presence, and by its ability to maintain sea control.

A fast, agile and high-technology surface combatant, Montgomery will be a platform for the launch and recovery of manned and unmanned vehicles. To meet increased demand for mission-tailored packages, its modular design will support interchangeable mission packages, allowing the ship to be reconfigured for antisubmarine warfare, mine countermeasures, or surface warfare missions on an as-needed basis. The LCS will be able to swap out mission packages pier side in a matter of days, adapting as the tactical situation demands. The modular approach also allows it to incorporate new or improved systems into the fleet as advanced technologies mature, providing flexibility and evolving capability. These ships will also feature an advanced networking capability to share tactical information with other Navy aircraft, ships, submarines and joint units.

Montgomery will be manned by a core crew from LCS Squadron One under the 3:2:1 crew rotation concept: three crews rotate between two ships, one of which is forward deployed for an extended period, while the other ship is stateside for workups and training. These core crews will be augmented by one of the three types of mission package crews as well as an aviation detachment. The prospective commanding officer of Montgomery’s initial crew is Cmdr. Troy Fendrick, from Tempe, Ariz. Upon commissioning in the future, Montgomery will be home ported in San Diego.