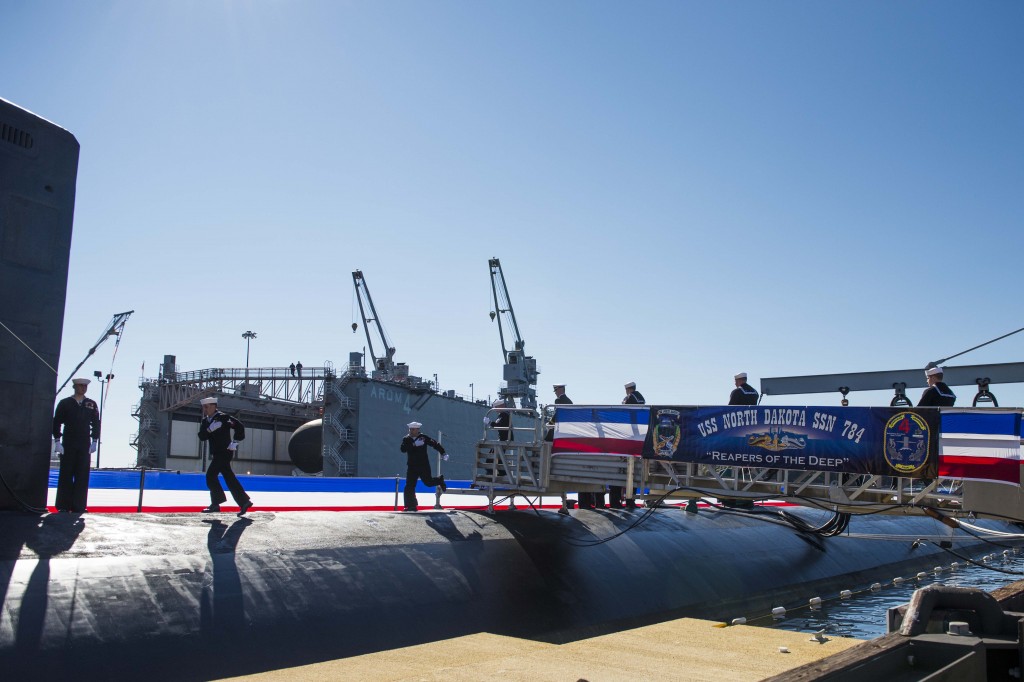 North Dakota is the 11th Virginia-class attack submarine to join the fleet, and the first of eight Block III Virginia-class submarines to be built. The Block III submarines are being built with new Virginia Payload Tubes designed to lower costs and increase missile-firing payload possibilities.

Adm. Jonathan Greenert, the 30th Chief of Naval Operations, was the ceremony’s keynote speaker. He enthusiastically welcomed North Dakota to the fleet and reminded the crew of the important role they will play in protecting the nation’s security while executing his standing operating orders of: Warfighting First, Operate Forward and Be Ready.

“It is with great pride that I welcome USS North Dakota to the fleet,” said Greenert. “May God bless and guide this warship and all who shall sail on her. I congratulate all whose hard work and dedication brought this magnificent warship to life. On behalf of the Secretary of the Navy and for the President of the United States, I hereby place USS North Dakota in commission.”

Hundreds of citizens from North Dakota, including the governor and senators, attended the commissioning ceremony.

“Today was a historic day for the people of North Dakota,” said North Dakota Gov. Jack Dalrymple. “We celebrated the commissioning of this majestic submarine just days before we mark the 125th anniversary of our statehood. We are proud and honored to have this grand ship bear the name, spirit and heritage of our great state.”

As the most modern and sophisticated attack submarine in the world, the submarine can operate in both littoral and deep ocean environments and presents combatant commanders with a broad and unique range of operational capabilities. North Dakota will be a flexible, multi-mission platform designed to carry out the seven core competencies of the submarine force: anti-submarine warfare, anti-surface warfare, delivery of special operations forces, strike warfare, irregular warfare, intelligence, surveillance and reconnaissance and mine warfare.

“From the Arabian Sea to the Polar Ice cap, North Dakota will operate undetected in the harshest environments on the planet as her crew protects the freedom of the seas and the interests of the United States,” said Vice Adm. Michael Connor, Commander, Submarine Forces. “Leaders around the world around the world continue to ask for more American submarine presence, because they realize that there are some very important things that must be done that only submarines can do. To the crew of North Dakota, you have done a fantastic job in bringing this ship to life. Now it time to shift your focus to global operations and get ready to meet your new responsibilities on patrol far from home.”

The submarine is 377 feet long, has a 34-foot beam, and will be able to dive to depths greater than 800 feet and operate at speeds in excess of 25 knots submerged. It will operate for 33 years without ever refueling.

Capt. Douglas Gordon is North Dakota’s first commanding officer. He leads a crew of about 136 officers and enlisted personnel. While born in Indianapolis, Indiana, he refers to Carrollton, Georgia, as home. He enlisted in the Navy and attended Nuclear Power School prior to being released from active duty to attend Auburn University on an NROTC scholarship. Gordon graduated from Auburn University in 1991 with a Bachelor of Science in Electrical Engineering.

“The crew has been looking forward to commissioning from day one of their arrival,” said Gordon. “Since we first began manning the ship in October 2011 our crew has progressed through numerous milestones which has culminated in our commissioning,’ said Gordon. “For the first time the ship got underway for sea trials in August, and this sea time permitted the crew their first opportunity to finally see how their hard work and preparation had paid off,”

“I know they are all as thrilled as I am in commissioning North Dakota, joining the fleet and eventually deploying,” said Gordon. “We will operate the ship at sea over the next nine months or so while conducting training, trials, certifications, and testing. Following a post-shakedown availability, the North Dakota will begin a normal operations cycle for working towards its first deployment.”

Ironically the only native North Dakotan assigned to the submarine is the ship’s senior enlisted advisor or chief of the boat, Master Chief Electronics Technician (Submarines/Diver) Timothy Preabt.

He grew up in Williston, N.D., but moved to Mandan, N.D., and graduated from Mandan High School in 1989.

“As a native of North Dakota and the only member of the crew from North Dakota, it is a great honor and privilege to be part of the North Dakota,” said Preabt. “The outreach of support received from the great people at home has been overwhelming. North Dakota was a great place to grow up and I have always been proud of my home state, but nothing made me more prouder to see the individual pride that the people of North Dakota have for their ship,”

“The crew of North Dakota has worked together ensuring we were ready to operate the Navy’s newest Virginia-class submarine. Taking this fine warship to sea and operating it was a testament for their hard work, training and preparation during the last three years'” said Preabt. “The USS North Dakota will always be a great submarine because she started out that way – thanks to the Sailors that brought her to life!”

Katie Fowler, wife of retired Vice Adm. Jeffrey L. “Jeff” Fowler, a native of Bismarck, N.D., serves as the submarine’s sponsor. She broke the traditional champagne bottle against the boat’s sail during the christening ceremony in November 2013.

North Dakota is the second Navy ship, and first submarine, to be named in honor of the people of “The Peace Garden State.” The other ship was the Delaware-class battleship BB-29, which was commissioned April 11, 1910 and decommissioned Nov. 22, 1923.