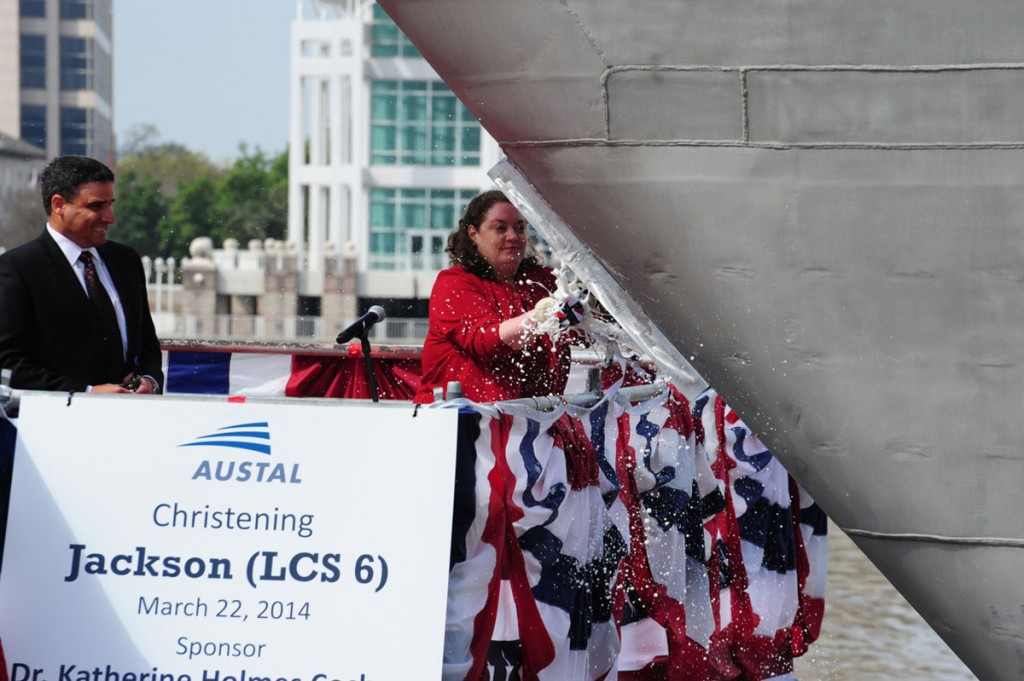 From Secretary of the Navy Public Affairs

Secretary of the Navy Ray Mabus delivered the keynote address at the christening ceremony of the future USS Jackson (LCS 6) March 22 at Austal in Mobile, Ala.

Mabus went on to discuss not only Cochran’s role in the future of the ship, but Jackson‘s future as well.

“When USS Jackson joins the fleet,” he said, “it will represent not just America’s interests, but also the story of Jackson and Mississippi and her people, around the globe.”

Jackson will be a key enabler of the U.S. Navy’s ability to maintain a worldwide presence.

“Today, the Pacific and Indian oceans are again a focus in U.S. defense strategy, and littoral combat ships like the Jackson will play a critical role,” Mabus said. “She’s fast, agile, modular, shallow draft, and will allow us to work in many different ways with our partners.”

Mabus also took time during his remarks to commend those who worked so hard to build the Jackson.

“The ship before you is a modern marvel, but so too is this incredible shipyard and its workforce,” said Mabus. Nearly 3,000 American craftsmen have made this ship possible, both here in Mobile and all around the country making components of the ship and its systems.”

These very systems were featured in another portion of Mabus’ remarks.

“This is a completely new type of ship, a new concept,” he said. “The weapons systems on Jackson can be traded out to fit whatever mission it is given. Those same systems can be upgraded as technology changes without having to build a new ship or changing anything out but that particular weapons system.”

Prior to Cochran breaking a bottle of champagne across the bow of Jackson to officially complete the christening ceremony, Mabus left the crowd in attendance with a final reminder of the Navy’s history and tradition.

“Now it is time to christen this incredible new ship so the crew can take it to sea and can defend our nation, just as their predecessors have for 238 years,” he said.