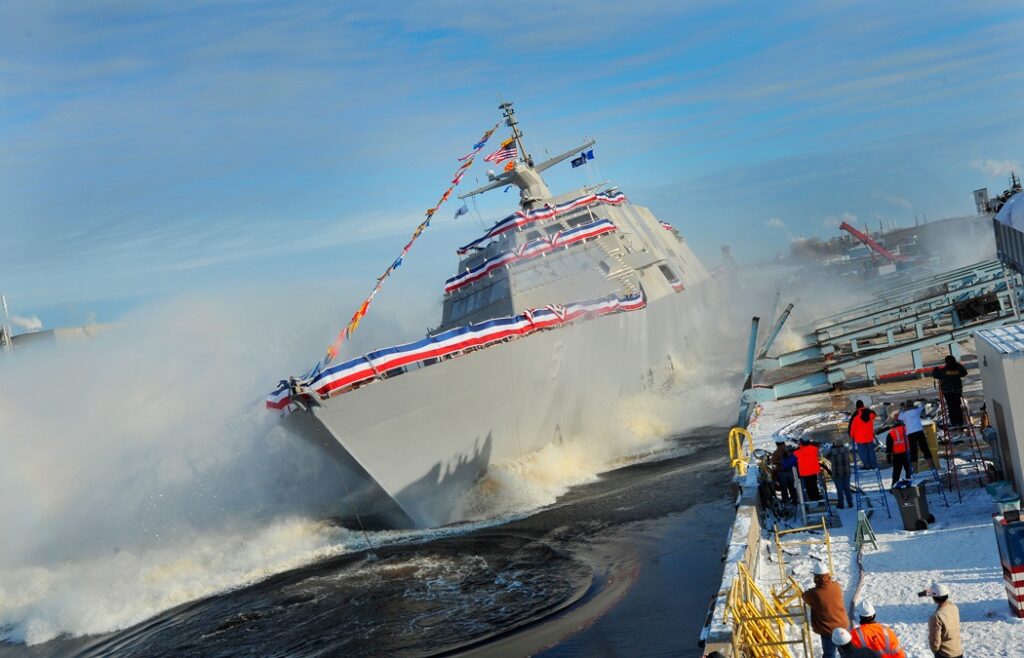 MARINETTE, Wis. (NNS) — The Navy, along with the Lockheed Martin-led industry team, christened and launched the future USS Milwaukee in a ceremony at the Marinette Marine Corporation shipyard Dec. 18, marking an important production milestone for the littoral combat ship program.

The ship joins the future USS Jackson (LCS 6), which launched Dec. 14 following construction at the Austal USA shipyard in Alabama. These ships are the first vessels procured under the block buy contract awarded in 2010 and represent the true beginning of “serial production” for the class. With serial production, the Navy is able to realize benefits such as improved cost structure per vessel and reduced construction time.

“Milwaukee will be an exceptional ship and I am pleased with the progress being made,” said Rear Adm. Brian Antonio, program executive officer, Littoral Combat Ships. “With serial production lines now in full swing at both LCS building yards, we are looking forward to each new ship joining the fleet on a regular and consistent timeline. This is a significant step for the program and the Navy.”

As is tradition, ship sponsor Sylvia Panetta struck the bow with a bottle of champagne, officially naming the ship. LCS 5 is the sixth U.S. Navy vessel christened in tribute to the Wisconsin city. Panetta, wife of former Secretary of Defense Leon Panetta, has been a tireless supporter of the military and longtime advocate for public service.

“It is a true privilege to serve as the sponsor for this ship as it begins its journey of service and commitment to our powerful fleet,” said Mrs. Panetta. “I am proud to support the ship’s crew members over the course of her service to ensure it leads with strength and protects our freedom. My congratulations to the city of Milwaukee as this ship assumes its name.”

The christening ceremony was followed by a dramatic side launch of the ship into the Menominee River.

Milwaukee will continue to undergo outfitting and testing at Marinette Marine. The ship is expected to deliver to the Navy in early 2015 following acceptance trials.

The LCS Class consists of two variants, the monohull design Freedom variant and the trimaran design Independence variant. The ships are designed and built by two industry teams, led by Lockheed Martin and Austal USA, respectively. Milwaukee is the third LCS constructed by the Lockheed Martin team.

Both variants of the LCS are fast, agile, focused-mission platforms designed for operation in near-shore environments yet capable of open-ocean operation. They are designed to embark specialized mission packages to defeat “anti-access” threats such as mines, quiet diesel submarines, and fast surface craft.

The Navy has been able to incorporate much of the knowledge gained in the construction, test and operation of LCS 1 and LCS 2, the lead ships of the class, into follow on ships. Many of those are currently in various stages of construction, and will deliver to the Navy over the next few years. These include Milwaukee‘s sister ships – Detroit (LCS 7), Little Rock (LCS 9), Sioux City (LCS 11), Wichita (LCS 13), and Billings (LCS 15).