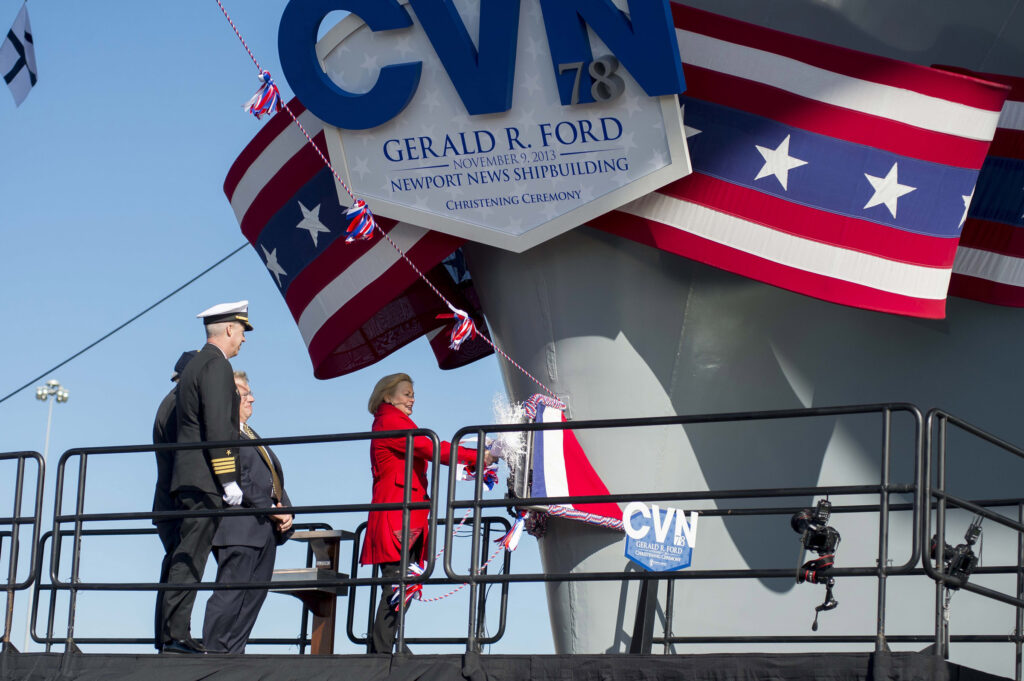 NEWPORT NEWS, Va. (NNS) — With the strike of a bottle of sparkling wine across the bow by the ship’s sponsor, the Navy christened its newest aircraft carrier Gerald R. Ford (CVN 78), the lead ship of the new Gerald R. Ford class, Nov. 9, in a ceremony at Huntington Ingalls Newport News Shipbuilding in Newport News, Va.

Susan Ford Bales, Ford’s daughter and the ship’s sponsor, had the honor of christening the ship in front of more than 20,000 Sailors, shipbuilders and civilians, bringing to life the Navy’s newest aircraft carrier design in more than 40 years.

“I christen thee United States Ship Gerald R. Ford,” said Bales, breaking the bottle across the bow. “May God bless all those who sail in her.”

The Ford class is designed with significant quality-of-life improvements and reduced maintenance. These innovations are expected to improve operational availability and capability, and reduce total ownership cost over its 50-year service life by $4 billion compared with Nimitz-class carriers.

The ship is also designed to evolve with advances in technology.

“The carrier is our Navy’s most adaptable platform,” said Adm. Jonathan Greenert, chief of naval operations. “This ship will not only launch the aircraft we currently have in inventory, it will launch aircraft we haven’t even begun to design. USS Enterprise (CVN 65), a ship we inactivated after more than 50 years of service, was relevant from her first day in service through her last.”

Greenert praised the designers, shipbuilders and Sailors who together have brought the ship to this important milestone.

“Ford will herald a new era of our carrier fleet,” said Greenert. “She is truly a technological marvel. We should embrace technology, but it is our people who underpin our success.”

The christening of the ship comes after more than 12 years of planning and construction. Newport News Shipbuilidng laid the keel in 2009 and is scheduled to deliver the ship to the Navy in 2016.

While the shipbuilder construction and systems installations continue, the Navy is building, training and developing Ford‘s crew to operate and maintain the state-of-the-art ship.

“Navy tradition dictates that today’s christening ceremony will spark life and luck into this great ship, but the true life of this ship will come from the unparalleled hard work, professionalism and dedication of the Gerald R. Ford crew,” said Capt. John Meier, commanding officer of Pre-Commissioning Unit Gerald R. Ford. “In partnership with Newport News Shipbuilding, we will match the most technologically advanced and adaptable platform in our Navy’s history with the most adaptable and technically proficient crew.”

CVN 78 honors the 38th President of the United States and pays tribute to his lifetime of service in the Navy, in the U.S. government and to the nation. During World War II he attained the rank of lieutenant commander in the Navy, serving on the light carrier USS Monterey (CVL-26). Ford was the first vice president and, in the aftermath of the Watergate scandal, succeeded the first president ever to resign, serving in the country’s highest office from 1974-1977.

Bales reflected upon her father’s final letter before his death, written to then-Secretary of the Navy Donald C. Winter, where the president wrote, “Thus, it is a great source of pride and humility to know that an aircraft carrier bearing my name will be forever connected with the valor and patriotic service of men and women of the United States Navy.”