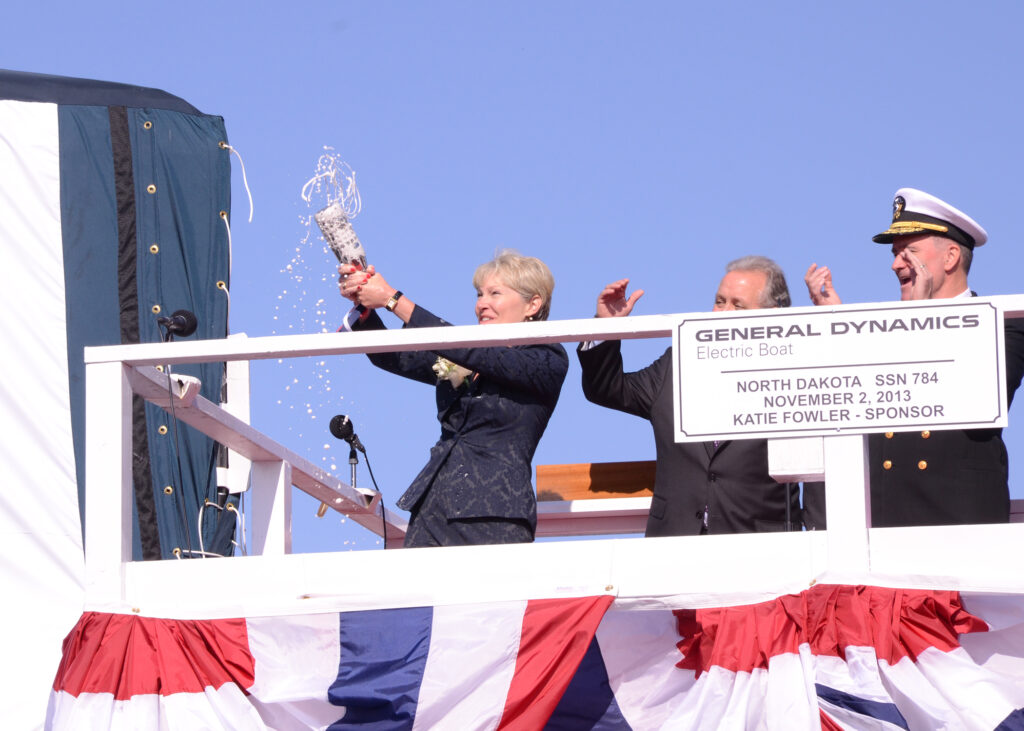 The ceremony marked the official naming of Pre-Commissioning Unit (PCU) North Dakota (SSN 784). The ship is currently under construction by both GDEB and Newport News Shipbuilding, a division of Huntington Ingalls Industries, through a teaming arrangement.

Ship sponsor Katie Fowler, wife of retired Vice Adm. Jeff Fowler, was on hand to officially christen the submarine by breaking a bottle of sparkling wine against the back of the boat’s sail.

“In the name of the United States, I christen thee North Dakota. May God bless her and all that sail in her,” said Mrs. Fowler just before giving the bottle a brisk swing.

“The Submarine Force eagerly awaits the day when USS North Dakota will assume the watch and establish a legendary reputation worthy of the name North Dakota,” said Connor. “There’s still much to be done, and there is not a moment to lose.”

PCU North Dakota is the second Navy ship named after the 39th state. The first was a Delaware-class dreadnought battleship.

SSN 784’s name was chosen in honor of North Dakota’s proud military heritage. Seventeen North Dakotans have been awarded the Medal of Honor for actions in combat.

North Dakota will be able to attack targets ashore with highly accurate Tomahawk cruise missiles and conduct covert long-term surveillance of land areas, littoral waters or other sea-based forces. Its reactor plant is designed so that it will not require refueling during the planned life of the ship, reducing lifecycle costs while increasing time at sea.

North Dakota‘s construction will continue during the next few months as its 138 crewmembers prepare to evaluate the ship’s seaworthiness and operational performance during sea trials.

“The Navy and the nation count on our submarine force to deliver relevant and powerful capabilities where and when it matters, and nothing is more important to meeting that commitment than building the most capable submarines in the world,” said Rear Adm. Ken Perry, commander, Submarine Group 2.

In addition to surveillance missions, North Dakota will be able to perform anti-submarine and anti-ship warfare; deliver and support special forces; and conduct mine delivery and minefield mapping operations.

“Every phase of submarine construction requires world-class expertise and close partnership, and today’s christening at Electric Boat signifies a key milestone in that partnership toward delivering North Dakota to the fleet,” Perry added.

The submarine measures 377 feet in length and has a beam of 34 feet. It will displace 7,800 tons and be capable of operating at more than 25 knots under water.