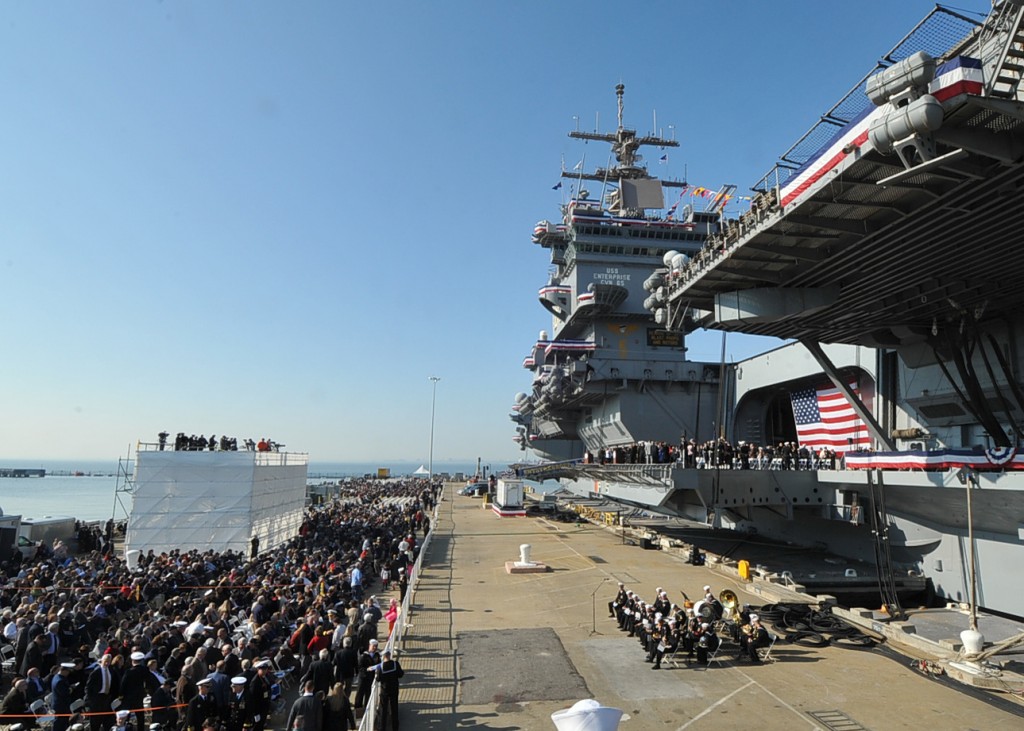 Attendees observe the inactivation ceremony of the aircraft carrier USS Enterprise (CVN 65). Enterprise was commissioned in 1961 and is scheduled to celebrate her inactivation, Dec. 1, after 51 years of service. U.S. Navy photo 121201-N-KQ416-200.

Enterprise, the world’s first nuclear powered aircraft carrier, recently completed its 25th and final deployment and returned to its homeport of Naval Station Norfolk for a scheduled inactivation, held prior to the ship’s terminal offload program and subsequent decommissioning.

The inactivation ceremony was the last official public event for the ship, and served as a celebration of life for the ship and the more than 100,000 Sailors who served aboard.

The Chief of Naval Operations, the Commander of United States Fleet Forces, nine of twenty-three prior commanding officers, many decorated war heroes, and thousands of Enterprise veterans attended the event.

“Enterprise is a special ship and crew, and it was special long before I got here” said Captain William C. Hamilton, Jr., the twenty-third and final commanding officer, during the ceremony.

“Before I took command of this ship, I learned the definition of ‘enterprise’, which is ‘an especially daring and courageous undertaking driven by a bold and adventurous spirit.’ Fifty-one years ago, this ship was every bit of that definition.”

“Here we are 51 years later,” he continued, “celebrating the astonishing successes and accomplishments of this engineering marvel that has roamed the seas for more than half the history of Naval Aviation. Daring, courageous, bold, and adventurous indeed.”

In honor of that spirit, Secretary of the Navy Ray Mabus, in a video message played at the ceremony, announced that the name Enterprise will live on as the officially passed the name to CVN-80, the third Ford class carrier and the ninth ship in the U.S. Navy to bear the name.

Commissioned on November 25, 1961, the eighth ship to bear the illustrious name Enterprise, the “Big E” was the world’s first nuclear-powered aircraft carrier.

A veteran of 25 deployments to the Mediterranean Sea, Pacific Ocean, and the Middle East, Enterprise has served in nearly every major conflict to take place during her history. From the Cuban Missile Crisis in 1962 to six deployments in support of the Vietnam conflict through the Cold War and the Gulf Wars, Enterprise was there. On September 11, 2001, Enterprise aborted her transit home from a long deployment after the terrorist attacks, and steamed overnight to the North Arabian Sea. Big ‘E’ once again took her place in history when she launched the first strikes in direct support of Operation Enduring Freedom.

More than 100,000 Sailors and Marines have served aboard Enterprise during its lifetime, which has included every major conflict since the Cuban Missile Crisis. It has been home ported in both Alameda, Calif., and Norfolk, Va., and has conducted operations in every region of the world.