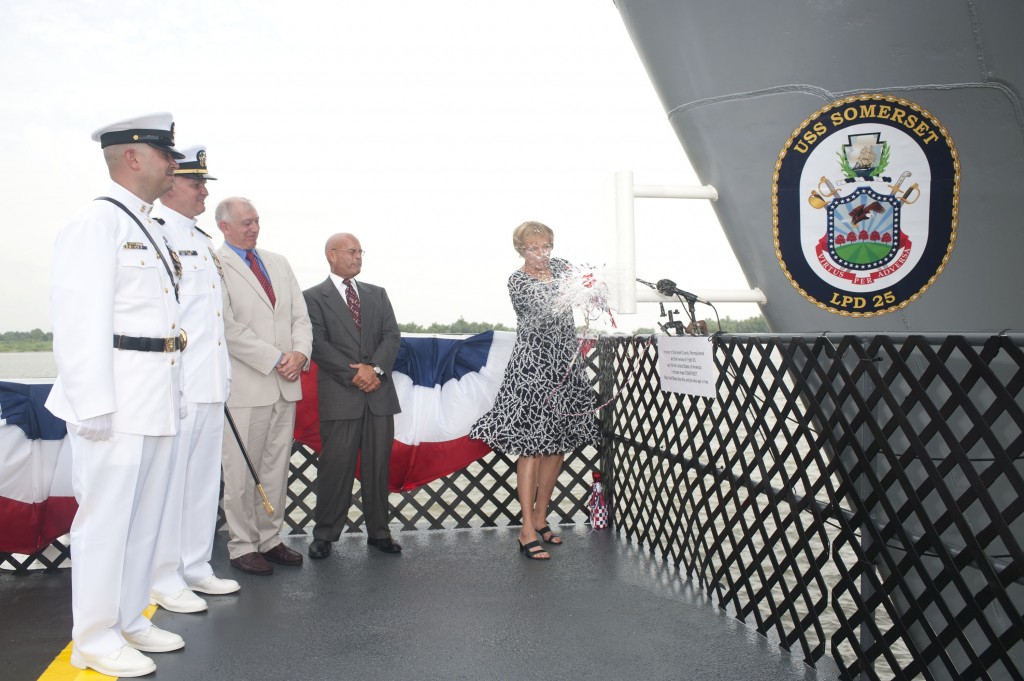 The highlight of the ceremony, attended by nearly 1,800, came when the ship’s sponsor Mary Jo Myers, the wife of Gen. Richard Myers, former chairman of the Joint Chiefs of Staff, broke a bottle of champagne across the bow to formally christen the ship in accordance with Navy tradition.

The ship is named in honor of the courageous passengers and crew of United Airlines Flight 93. Their actions prevented terrorist hijackers from reaching their destination only to have the airplane crash near Shanksville in Somerset County, Pa., Sept. 11, 2001.

Patrick White, president of the Families of Flight 93, delivered the ceremony’s principal address.

“We thank our nation for honoring and remembering those 40 aboard Flight 93 with this extraordinary tribute, the Somerset,” said Patrick White, president of Families of Flight 93 and principal speaker at the event. White’s cousin, Louis J. Nacke II, died on board the flight. “These passengers prevented additional tragedy on Sept. 11 through their selfless actions. The Somerset and her steadfast crew – now and in the future – are both a living tribute and vigilant reminder of sacrifice made to protect the lives of unknown others.”

During the weeks following the Flight 93 crash, recovery personnel retrieved more than 95 percent of the airplane’s wreckage from the crash site. An American flag was hoisted on the top of a power shovel or “dragline” on a hill dominating the area. The dragline had been used in coal stripping at one time, and the equipment with the flag became a symbol of the effort.

In the summer of 2008, steel from the dragline’s bucket was melted down and cast into Somerset‘s bow stem. Somerset is the final of three ships named to honor heroes of the September 11 attacks, joining the USS New York and USS Arlington, respectively.

The ship’s legacy is not lost on those responsible for building it.

“This ship is named to honor that indomitable fighting spirit – the timeless American who will fight for the most basic human rights,” said Rear Adm. David H. Lewis, the Navy’s program executive officer for ships. “This ship will sail until the year 2050 and beyond. Tens of thousands of sailors will serve aboard her, and thousands more will sail in company with her. Millions of people throughout the world will see her, visit her and read about her exploits. They will wonder why the name Somerset was given to such a great and fine warship. They will read, they will see, they will learn, and they will be amazed.”

The 24,900-ton Somerset is being built at the Huntington Ingalls Industries shipyard in Avondale, La. The ship is 684 feet in length, has an overall beam of 105 feet, and a navigational draft of 23 feet. Four turbo-charged diesels power the ship to sustained speeds of 22 knots.

Somerset will provide improved warfighting capabilities, including an advanced command-and-control suite, increased lift-capability in vehicle and cargo-carrying capacity and advanced ship-survivability features. The ship is capable of embarking a landing force of up to 800 Marines.