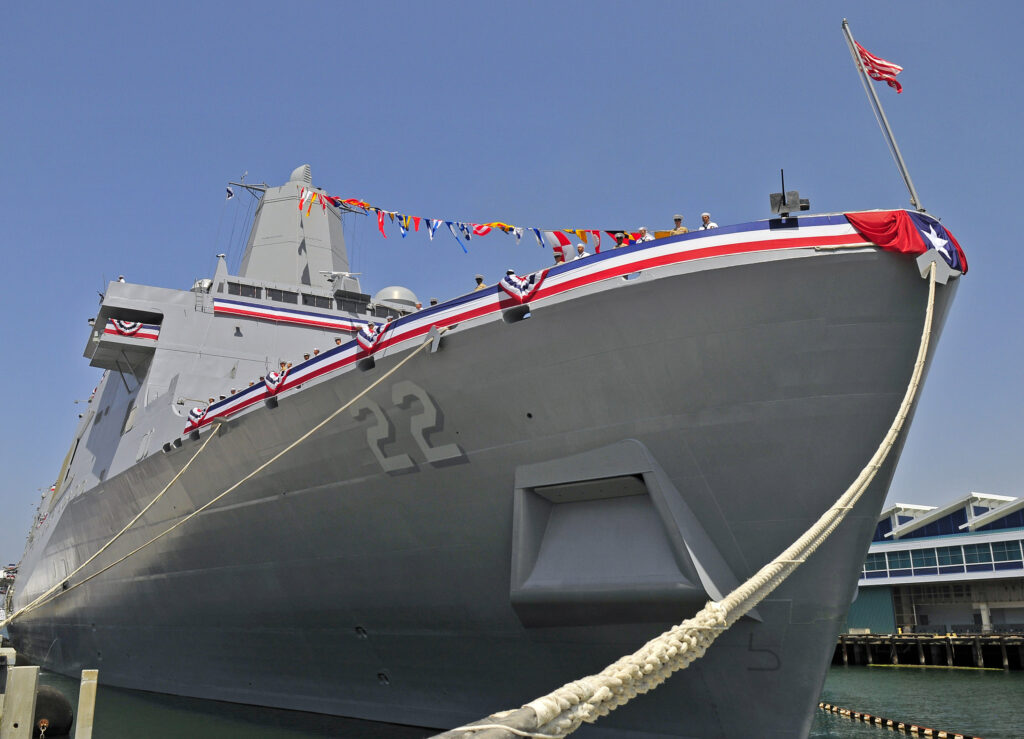 The ship is named for the city of San Diego, principal homeport of the Pacific fleet, and honors the people of “America’s Finest City” and its leaders for their continuous support of the military.

The ship will be homeported here. It is the only ship in the Navy homeported in its namesake city. San Diego Mayor Jerry Sanders presented the commanding officer of San Diego, Cmdr. Kevin P. Meyers, with the key to the city, saying it was, “in honor of welcoming America’s finest ship to America’s Finest City.”

Adm. Mark Ferguson, vice chief of naval operations, delivered the ceremony’s principal address. He said that San Diego and her crew are coming into the Navy at an important time.

“Our expectations for this ship are very high,” said Ferguson. “It arrives at a time when nearly half of our ships are underway on a given day; when we are surging forces to the Middle East to deter the threat of aggression; when we are rebalancing our forces to the Pacific; and when we face increasingly complex, and global, security challenges in an uncertain fiscal environment.

“Take a good look at this ship because she will be very busy,” said Ferguson. “Her time will be consumed fulfilling the tenets of our Navy. She will focus on warfighting, she will operate forward and she will spend her time being ready. This is our charge to the fleet, and the expectation of our nation that our Navy be ready to answer the call to defend freedom on the seas.”

“Thank you for the dedication, professionalism and perseverance you have displayed over the years as you brought this ship to commissioning,” Hunt said. “USS San Diego… always keep warfighting first. I promise that you will operate forward. I charge you to always be ready. It is demanded by the surface warfare profession and a mandate for a ship with this incredible capability.”

The ship’s sponsor, Mrs. Linda Winter, wife of former Secretary of the Navy Donald C. Winter, gave the order to the ship’s approximately 377 officers and enlisted personnel to, “man our ship and bring her to life.” With that order, the crew began a spirited charge up the brow to take responsibility for the Navy’s newest warship. Marines from the 1st Marine Expeditionary Force, based at Camp Pendleton, Calif., soon joined the Sailors to man the rails of the ship, as a show of the Navy/Marine Corps team that will serve aboard.

After his ship was manned and brought to life, Meyers told the audience that the San Diego memorabilia donated to the ship by the city, including street signs, was proof that, “the city has open its heart to us and we are truly, truly appreciative.”

Boatswain’s Mate 2nd Class (SW) Joshua Cuevas said he was proud to be part of the ship’s first crew, traditionally known as a “plankowner” because they were present as the ship was being built.

“It took a lot of hard work in building this ship so to be a plankowner is an overwhelming achievement,” he said Cuevas, a Miami native.

Cuevas added that having a ship named for San Diego is fitting.

“The city has always supports the Navy and having a ship named for the city of San Diego in San Diego is a way of giving back,” he said.

Built by Huntington Ingalls Industries in Pascagoula, Miss., San Diego is 684 feet in length, has an overall beam of 105 feet, a navigational draft of 23 feet, displaces about 24,900 tons and is capable of embarking a landing force of about 800 Marines. Four turbo-charged diesel engines power the ship to sustained speeds in excess of 22 knots.

San Diego is the sixth amphibious transport dock ship in the San Antonio class and the fourth ship to carry the name. Her principal mission is to deploy combat and support elements of Marine Expeditionary Units and Brigades. With the capability of transporting and debarking air cushion or conventional landing craft and augmented by helicopters or MV-22 vertical take-off and landing aircraft, these ships support amphibious assault, special operations, and expeditionary warfare missions. The ship will provide improved warfighting capabilities including an advanced command-and-control suite, increased lift capability, increased vehicle and cargo-carrying capacity, and advanced ship survivability features.